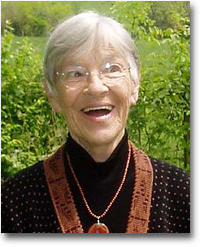 Bernadette Roberts (1931 – 2017) was a former Carmelite nun and a contemplative in the Catholic tradition.  After spending eight and a half years as a monastic, Roberts left the life of a nun and enrolled as a pre-med student at the University of Utah, where she stayed for three years before moving to California.  Roberts earned a bachelor’s degree in Philosophy and, later, a master’s degree in Early Childhood Education from the University of Southern California.  She taught physiology and algebra at the high school level and eventually opened a Montessori school in Montana in 1969.  Roberts authored several spiritual books, including The Experience of No-Self: A Contemplative Journey; The Path to No-Self: Life at the Center; What is Self?: A Study of the Spiritual Journey in Terms of Consciousness; and The Real Christ.

“[T]oward later afternoon, I was standing on [a] windy hillside looking down over the ocean when a seagull came into view, gliding, dipping, playing, with the wind. I watched it as I’d never watched anything before in my life. I almost seemed mesmerized; it was as if I was watching myself flying, for there was not the usual division between us. Yet something more was there than just a lack of separateness, “something” truly beautiful and unknowable. Finally, I turned my eyes to the pine-covered hills behind the monastery and still, there was no division, only something “there” that was flowing with and through every vista and particular object of vision. To see the Oneness of everything is like having special 3D glasses put before your eyes; I thought to myself: for sure, this is what they mean when they say ‘God is everywhere.’”

Quoted by Robert M. May in Cosmic Consciousness Revisited.