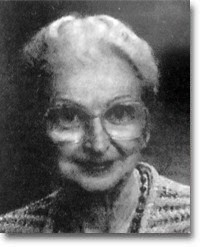 Irina Starr (1911 – 2002) was an American mystic, spiritual writer, and teacher who lived in the Los Angeles, CA area.  She described her profound and lengthy mystical experience in her book The Sound of Light.  Starr also wrote a number of other spiritual works, including With all thy heart: The sacred summoning; From these waters: The continuing renewal; and The Pilgrim’s Path series.

In one of her passages in The Sound of Light, Irina Starr described the beginning of one of her mystical experiences, which lasted for four days:

“The radiance which permeated my eyelids and suffused the entire room caught me unawares.  Everything around me had come to life in some wondrous way and was lit from within with a moving, living, radiance.  It was somewhat as it must be with one blinded, whose vision is first restored.

I was obviously seeing with vision other than the purely physical, but what I saw did not conflict with what my ordinary vision registered any more than the central vision conflicts with the peripheral; or close, medium, and far ranges of vision conflict with one another.  I saw objects in the ordinary way as well as with some extraordinary extension of the visual faculty; I saw into them with an inner vision and it was this inner sight which revealed the commonplace objects around me to be of the most breath-taking beauty. …

The one thing which was, above all, significant was that everything was literally alive; the light [that permeated all] was living, pulsating, and in some way I could not qiote grasp, intelligent.  The true substance of all I could see was this living light, beautiful beyond words.  This awareness of beauty so intense as to be nearly unbearable was not to leave me for four days in which I beheld the world with extended sight.

As I gazed about the room on that first morning, one of the things which particularly fascinated me was that there was no essential difference between that which was inanimate – only in form and function, not in basic substance, for there was only one Substance, that living, knowing, Light which breathed out from everything.  I was aware of the outward difference of each object which drew my attention, but that superficial difference in no way concealed or conflicted with the one substance or living light which composed each alike.  Ever since I could remember, I had accepted the fact of the one-ness of all life and manifestation, but it was purely theoretical, an intellectually accepted condition.  But here I was literally beholding the fact itself so very far beyond any concept I had ever held.

There was such beauty in all that met my eyes that I could have remained for hours gazing at any one thing and the feelings of joy and wonder were so strong they seemed to generate a peculiar pain.  I recall that I was near-bursting with a tremendous, non-conceptual, understanding of life – like a balloon which expanded to its utmost capacity – so that my mind was strained with this great, formless ‘knowing’ and I actually prayed, Enough!…

I knew that I could never explain or transmit verbally the essence of what was transpiring in my consciousness, I could only be the truth, the living expression of inner revelation, and as such it would be transmitted in its own way, beyond my knowing or intent…It is a wondrous and mysterious sort of divine chemical process which takes place in the human and his orbit as truth moves from concept into living experience.  We are holy factories in more ways than one.”

After her life-transforming experiences, Irina Starr stated that, “I was not the same person I had been one short week before.  Nor could I ever experience my world again but in a new and revelatory manner; I had emerged into a dawn-fresh and excitingly life-filled dimension.”

Quoted by Nona Coxhead in The Relevance of Bliss:  A Contemporary Exploration of Mystic Experience.