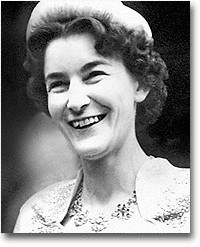 Jacquetta Hawkes (1910 – 1996) was a British archaeologist and writer. Hawkes was the first woman to study archaeology and anthropology at Newnham College, University of Cambridge, where she graduated with first class honours. She was the daughter of the scientist Sir Frederick Gowland Hopkins who received the 1929 Nobel Prize in Physiology or Medicine. Her many works include A Land, The World of the Past, and The Atlas of Early Man.

In the following passage, Hawkes described her mystical experience, which occurred while she was a young lady working on an archaeological project on Mount Carmel in Israel:

“One night when the land was still fresh from the rain, I was wandering near our camp enjoying the moonlight, when an intense exaltation took possession of me. It was as though the White Goddess of the moon had thrown some bewitching power with her rays. It seemed to me that our arid satellite was itself a living presence bounding in the sky – I do not understand this use of the word “bounding”, but it comes insistently, and I cannot but use it to express some deeply felt vitality. Indeed, the whole night was dancing about me.

It appeared that the moonlight had ceased to be a physical thing and now represented a state of illumination in my own mind. As here in the night landscape the steady white light threw every olive leaf and pebble into sharp relief, so it seemed that my thoughts and feelings had been given a quite extraordinary clarity and truth.

So powerfully was I moved by this sense of possession that I climbed up on to a high outcrop of rock against the mouth of the wadi and knelt down there. The moonlight swam round, and in, my head as I knelt looking across the plain to the shining silver bar of the Mediterranean.

From far behind me, still muffled in the folds of the mountain, I heard the bronze sound of camel-bells. To my sharpened but converging senses they seemed like a row of brown flowers blooming in the moonlight. In truth the sound of bells came from nothing more remarkable than a caravan, perhaps twenty camels with packs and riders, coming down the wadi on its way north to Haifa. But even now I cannot recognize that caravan in everyday terms; my memory of it is dreamlike, yet embodies one of the most intense sensuous and emotional experiences of my life. For those minutes, and I have no notion how many they were, I had the heightened sensibility of one passionately in love, and with it the power to transmute all that the senses perceived into symbols of burning significance. This surely is one of the best rewards of humanity. To be filled with comprehension of the beauty and marvelous complexity of the physical world, and for this happy excitement of the senses to lead directly into an awareness of spiritual significance. The fact that such experience comes most surely with love, with possession by the creative eros, suggests that it belongs near the root of our mystery. Certainly it grants man a state of mind in which I believe he must come more and more to live: a mood of intensely conscious individuality which serves only to strengthen an intense consciousness of unity with all being. His mind is one infinitesimal node in the mind present throughout all being, just as his body shares in the unity of matter….

[A]s the moon leapt and bounded in the sky, I took full possession of a love and confidence that have not yet forsaken me.”

Quoted by Craig Pearson, Ph.D. in The Supreme Awakening.