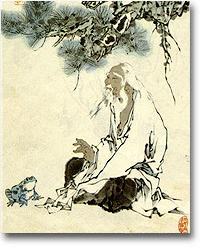 Zhūangzi (~369 BC – ~286 BC), literally Master Zhuang, also known as Chuang Tzu, was a Taoist Chinese philosopher and writer. The Zhuangzi book, attributed to Master Zhuang, contains stories and anecdotes that exemplify the carefree nature of the ideal Taoist sage. The Zhuangzi is one of the three foundational texts of Taoism, along with the Tao Te Ching and the Lieh Tzu.

Union with the Infinite and the Eternal was the goal of Master Zhuang. To achieve his mystical consciousness, Master Zhuang sought to identify himself with “Infinity-Eternity” in order to become one with the “great Interpenetration.”

Zhūangzi stated about his mystical experience: “The heavens and the earth and I have come into existence together, and all creation and I are one.”

Quoted by Sidney Spencer from Mysticism in World Religion.