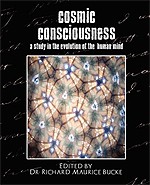 Cosmic Consciousness: A Study in the Evolution of the Human Mind by Richard Maurice Bucke (1901)

This work is the magnum opus of Bucke’s career, a project that he researched and wrote over many years. In it, Bucke, a McGill-educated medical doctor, described his own experience, that of contemporaries (most notably Whitman, but also unknown figures like “C.P.”), and the experiences and outlook of historical figures including Buddha, Jesus, Paul, Plotinus, Muhammad, Dante, Francis Bacon, and William Blake.

Bucke developed a theory involving three stages in the development of consciousness: the simple consciousness of animals; the self-consciousness of the great majority of humanity (encompassing reason, imagination, etc.); and cosmic consciousness – an emerging faculty and the next stage of human development. Among the effects of this progression, he believed that he detected a lengthy historical trend in which religious conceptions and theologies had become less and less fearful.

Cosmic Consciousness (first published in 1901) remains a valuable, pioneer work in the study of mystical experience.  You can read  Cosmic Consciousness for free at The Internet Archive, a nonprofit digital library founded in 1996 and based in California.