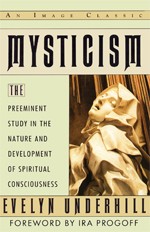 Mysticism: A Study in Nature and Development of Spiritual Consciousness by Evelyn Underhill (1930)

Mysticism is usually thought of as an intense state involving personal unification with the Divine or Ultimate Reality. By its very nature, it is an ineffable experience, impossible to put completely into words. It is not impossible, however, to study the phenomenon, with an eye toward understanding not only its nature and manifestations, but its relationship to spirituality in general. This book is such a study. Widely considered one of the best books on mysticism for the general reader, this classic volume assembles a broad range of information scattered among monographs and textbooks in many languages.

The work of a noted British authority on mysticism, it is divided into two parts: the first provides an introduction to the general subject of mysticism and its relation to metaphysics, psychology, theology, magic, and symbolism. The second and longer part contains a detailed study of the nature and development of spiritual or mystical consciousness, including such topics as the awakening of the self, the purification of the self, voices and visions, introversion, ecstasy and rapture, the dark night of the soul, and the unitive life. An interesting appendix provides a historical sketch of European mysticism from the beginning of the Christian era to the death of Blake.

Richly documented with material drawn from such great mystics as St. Teresa, Meister Eckhart, St. John of the Cross, and William Blake, this remarkable study will be of immense interest to students, psychologists, theologians — anyone interested in this extremely personal and powerful form of spiritual life.

A free PDF copy of Mysticism: A Study in Nature and Development of Spiritual Consciousness is available at www.ccel.org.