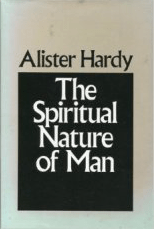 The Spiritual Nature of Man: Study of Contemporary Religious Experience by Alister Hardy (1983)

This book is based upon the first eight years’ work of the Religious Experience Research Unit set up at Manchester College, University of Oxford, in 1969. Sir Alister Hardy, the founder of the Unit, was a distinguished marine biologist at Oxford and a Fellow of the Royal Society. In Hardy’s words, the book is “intended as a contribution towards the study of this important, but still so little understood, part of our make-up, made in the spirit of an inquiring naturalist.”

The Spiritual Nature of Man: Study of Contemporary Religious Experience offers a discussion of the whole range of religious experience as revealed by the examination of the first three thousand personal accounts sent in to the Religious Experience Research Unit.  These accounts include ecstasies, visions, voices, illuminations, unitive/mystical consciousness, and many other experiences.  Chapters cover: Varieties of spiritual awareness, Dynamic patterns of experience, Triggers and consequences, Studies from the records, Quantitative research, and more.

While Hardy sought to examine spiritual experience broadly rather than to make a case for any specific religion, he believed that, “The bringing of the elements of religion [i.e., spiritual elements] into the realm of scientific thought may prove to be a vital issue:  unless this can be done, religion as a moral force may disappear, and we cannot be sure that our civilization will survive without it.  Accordingly, one of Hardy’s main goals in writing his book, was “to present such a weight of objective evidence in the form of written records of these subjective spiritual feelings and of their effects on the lives of the people concerned, that the intellectual world must come to see that they are in fact as real and as influential as are the forces of love.”

You can read The Spiritual Nature of Man for free at The Internet Archive, a nonprofit digital library founded in 1996 and based in California.