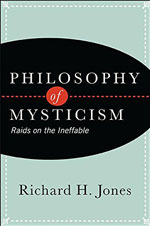 Philosophy of Mysticism: Raids on the Ineffable by Richard H. Jones (2016)

This 2016 work provides a thorough, contemporary study of the philosophical issues raised by mysticism.  As the author notes in the book’s preface, “A comprehensive treatment of the basic problems in [the field of mysticism] is long overdue.  No major comprehensive book on the philosophy of mysticism has been published since Walter Stace’s Mysticism and Philosophy in 1960….  Since then, a number of developments and new issues have arisen – in particular, those raised by postmodernism and scientific research.”

The book focuses on the skeleton of beliefs and values of mysticism:  knowledge claims made about the nature of reality and of human beings; value claims about what is significant and what is ethical; and mystical goals and ways of life. Jones engages language, epistemology, metaphysics, science, and the philosophy of mind. Methodological issues in the study of mysticism are also addressed. Examples of mystical experience are drawn chiefly from Buddhism and Advaita Vedanta, but also from Christianity, Judaism, Islam, and Daoism.