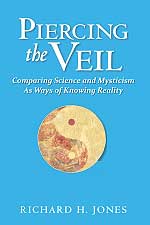 Piercing the Veil: Comparing Science and Mysticism as Ways of Knowing Reality by Richard H. Jones (2010)

This book explores an area in the field of “science and religion” that scholars usually neglect – science and mysticism. It examines the recent efforts of New Age popularizers and scholars who see a convergence of modern science and various Asian schools of mysticism – in particular, Madhyamaka Buddhism and Advaita Vedanta. The works examined include the Dalai Lama’s The Universe in a Single Atom: The Convergence of Science and Spirituality, B. Alan Wallace’s Buddhism and Science: Breaking New Ground, the physicist Victor Mansfield’s Tibetan Buddhism & Modern Physics: Toward a Union of Love and Knowledge, and Fritjof Capra’s best seller, The Tao of Physics. The entire New Age idea of any “quantum mysticism” is shown to be groundless.

In Part I, the distinctions that any comparative study of science and mysticism should recognize are outlined.  Philosophical problems arising in comparing science and mysticism as ways of knowing reality are highlighted here, including issues surrounding the neurological study of meditators by such scientists as Eugene G. D’Aquili, Andrew B. Newberg, and Mario Beauregard.  Other topics, such as what role mysticism may have played in the history of science, are also discussed. In Part II, the efforts of those who see convergences or parallels between modern science and Asian mysticism are examined. In Part III, central questions in the philosophy of religion related to mysticism are addressed, and a way that science and mysticism can be positively related is set forth.