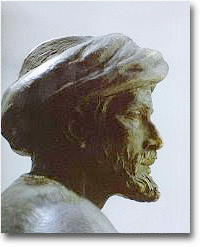 Abraham Abulafia (1240 – 1291) was a Jewish mystic, philosopher, and writer. He was the founder of the school of “Prophetic Kabbalah.”  Abulafia wrote poems, treatises on grammar, and books, including his influential handbooks that teach one how to achieve the prophetic experience [Abulafia’s term for mystical experience]: Chayei ha-Olam ha-Ba, Or ha-Sekhel, Sefer ha-Cheshek, and Imrei Shefer.

In teaching others through his handbooks how to achieve mystical experience, Abulafia presumably described his experience.  One of Abulafia’s texts explains how the mystic and The Divine join and how the mystic becomes part of the “I” of God:

“If the mystic has felt the divine touch and perceived its nature…his name is like the Name of his Master [God]….For now he is no longer separated from his master, and behold he is his master and his master is he; for he is so intimately adhering to God [here the term devekut is used] that he cannot by any means be separated from him, for he is He.  And just as his Master, who is detached from all matter is called…the knowledge, the knower, and the known, all at the same time, since all three are one in God:  so shall he, the exalted individual, the master of the exalted Name [of God], be called intellect, while he is actually knowing; then he is also the known, like his master, and then there is no difference between them.”

Quoted by Byron L. Sherwin from Kabbalah:  An Introduction to Jewish Mysticism.