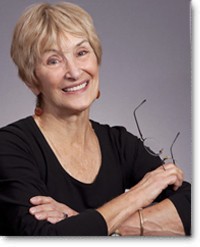 Sophy Burnham (1936 – ) is an intuitive, a healer, and a spiritual director, as well as playwright, novelist, and non-fiction writer.  She was married and has two daughters and four granddaughters.  Burnham’s books include, among many others, Angel Letters, The Path of Prayer, and The Ecstatic Journey: Walking the Mystical Path in Everyday Life.  Her works have been translated into twenty-four languages.

Sophy Burnham had the following mystical experience, which occurred at Machu Picchu when she we 42 years of age, after she gave herself to God:

“With that I was immersed in a sweetness words cannot express.  I could hear the singing of the planets, and wave after wave of light washed over me.  But this is wrong, because I was the light as well, without distinction of self or of being washed.  It is hard to speak of what happened at this stage.  At one level, I ceased to exist, was swallowed into the light.  How long that lasted, I do not know.  At another level, although I no longer existed as a separate ‘I,’ nonetheless I saw things, thus indicating the duality of ‘I’ and ‘other.’  In that state I knew things that today I haven’t even the wit to ask questions about.  Some I do not remember, but I know that I saw into the structure of the universe.  I had the impression of knowing beyond knowledge and being given glimpses into ALL.  I capitalize because of the feebleness of words.  It was knowledge untranslatable and it filled me with joy….

I saw the perfection of all things that had ever happened or ever will, and how…destruction didn’t matter, for energy goes on, transmuted, so that even destruction is an expression of pure God-ness, love, and creativity.

Most of it I have forgotten now.  But one image remains – of sparks of light, like angels, like atoms or electrons sweeping, dancing, pulled behind the image of the Light.  They were alive with praise….And yet they were themselves composed of the Divine, as all is divine, every atom, every particle of light, singing wildly in its joy.

I did not see God, for that would have blinded me, but I saw the bending of the grasses at the passing of the hem of His garments.  Everything alive with praise!

In the midst of these visions, as I was returning to my senses, I made one spotty, human, and inconsequential prayer, a speechless quiver of heartstrings (already coming out of the unitive state, you see).  And then, I felt the universe tilt with such joyful delicacy, such warmth of understanding, that it felt like a mother who laughingly hugs her little boy, crying Yes!, with unfathomable, unconditional, and insuperable love.”