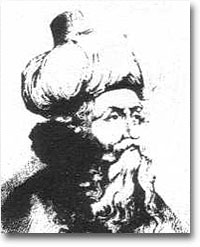 Muhammed Ali Muhammed Ibn al ‘Arabi al-Ta’i al-Hatimi, better known simply as Ibn Arabi (1165 – 1240), was born into a Muslim family in Murcia, Spain, on August 7, 1165. After his education in Seville, Ibn Arabi became married and obtained a position as secretary to the governor of Seville. He was twenty years of age when he was initiated into the Sufi path. It is not known when he became illumined by God’s grace and realized the Unity of which he was later to write; but we know that between the ages of twenty-eight and thirty, he traveled several times to Tunis in North Africa, where he visited a number of Sufi Shaikhs, and spent much of his time in studying and writing.

He wrote his magnum opus, Bezels Of Wisdom, around 1230; he is said to have once remarked that he had written over two hundred and fifty books during his lifetime. It is because he represents an early attempt within the Islamic tradition to convey a rational formulation of the vision of Unity that he must be deemed one of the most influential thinkers of Sufism. In his writings, Ibn Arabi strove above all to explain the identity of God and the Self for the benefit of all who sought to comprehend the Truth.

Here are a few of his most penetrating statements about his mystical consciousness:

When the mystery of the oneness of the soul and the Divine is revealed to you, you will understand that you are no other than God. Then you will see all your actions to be His actions and all your attributes to be His attributes and your essence to be His essence….

Thus, instead of [your own] essence, there is the essence of God and in place of [your own] attributes, there are the attributes of God. He who knows himself sees his whole existence to be the Divine existence but does not experience that any change has taken place in his own nature or qualities. For when you know yourself, your sense of a limited identity vanishes, and you know that you and God are one and the same….

Nothing but the Reality is. There is no separate being, no arriving and no being far away. This is seen in true vision; when I experienced it, I saw nothing but Him.

When my Beloved appears, with what eye do I see Him? With His eye, not with mine; for no one sees Him except Himself.

It is none other than He who progresses or journeys as you. There is nothing to be known but He; and since He is Being itself, He is therefore also the journeyer. There is no knower but He; so, who are you? Know your true Reality. He is the essential Self of all. But He conceals it by [the appearance of] otherness, which is “you.”