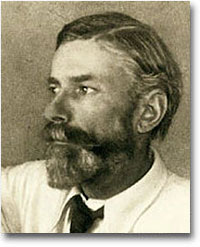 Edward Carpenter (1844 – 1929) was an English poet and philosopher who was educated at Trinity Hall, University of Cambridge. At Cambridge, Carpenter was elected a fellow and was ordained in 1869. In 1870, he became the curate for the theologian Frederick Denison. However, Carpenter tired of the religious and social conventions of his time and, in 1874, he became a traveling lecturer for the newly founded university extension movement, teaching in various industrial towns in northern England.

An early activist for gay rights and prison reform, Carpenter also advocated a vegetarian diet, and he stood against the practice of vivisection. In 1883, Carpenter bought a small farm in Derbyshire; he would live there for the next 39 years. A prolific writer who authored dozens of works, Carpenter was particularly known for his essay “Civilisation: Its Cause and Cure”, in which he wrote of civilization as a type of disease through which human societies pass.

Edward Carpenter wrote the following regarding his mystical consciousness:

“Thus at last the Ego, the mortal, immortal self—disclosed at first in darkness and fear and ignorance in the growing babe—finds its true identity. For a long period it is baffled in trying to understand what it is. It goes through a vast experience. It is tormented by the sense of separation and alienation—alienation from other people and persecution by all the great powers and forces of the universe: and it is pursued by a sense of its own doom. Its doom truly is irrevocable. The hour of fulfillment approaches, the veil lifts and the soul beholds at last its own true being….. At last there comes a time when we recognize—or see that we shall have to recognize—an inner equality between ourselves and all others; not of course an external equality, for that would be absurd and impossible, but an inner and profound equality. And so we come again to the mystic root-conception of Democracy.”

Quoted from Pagan and Christian Creeds by Edward Carpenter.