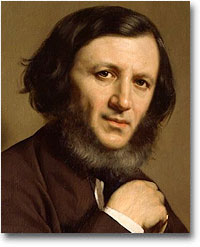 Robert Browning (1812 – 1889) was a prolific Victorian-era poet and playwright born in Camberwell, a suburb of London. Browning received an honorary D.C.L. (Doctor of Civil Law) degree from Balliol College, University of Oxford, in 1887. Among Browning’s notable works are Paracelsus, “The Pied Piper of Hamelin”, Men and Women, The Ring and the Book, and Asolando.

“Truth is within ourselves; it takes no rise
From outward things, whate’er you may believe.
There is an inmost centre in us all,
Where truth abides in fulness; and around,
Wall upon wall, the gross flesh hems it in,
This perfect, clear perception – which is truth.
A baffling and perverting carnal mesh
Binds it, and makes all error: and to know,
Rather consists in opening out a way
Whence the imprisoned splendour may escape,
Than in effecting entry for a light
Supposed to be without.”

Quoted from Paracelsus by Robert Browning.