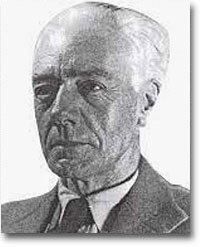 John Redwood Anderson (1883 – 1964) was a leading English poet and playwright. He was educated at Trinity College, University of Oxford, as well as the Brussels Conservatoire. Redwood Anderson taught in different parts of England before settling in Hull where he taught at Hymers College from 1916 to 1942. There, he was a member of the Hull Literary Club and the Hull Literary and Philosophical Society, and he served as president of the Hull Chamber Music Society.

After his retirement, Redwood Anderson moved to Wales and, in 1953, to London. During his career as a poet, Redwood Anderson wrote over 20 books. His last book of poetry, published in 1962, was While the Fates Allow. He also wrote the play “Babel” which was produced several times.

In his poem, “Hinterland”, John Redwood-Anderson attempted to convey the sense of the mystical reality of God’s unlimited love—a love realized through identity—as follows:

“There is a knowledge beyond knowledge: a knowledge that knows itself not—
not itself, nor the object known, nor its own knowing;
so, too, beyond the love of person, is a love that knows not person—
not the self loving, nor the self loved, nor the love between them:
only such knowing breaks through the soul’s last self-illusion;
only such love shall overcome the wound and the anguish of love:
knower and known made one in the blind state of knowledge;
lover and loved made one in the blind state of love.

In describing the deepest state of mystical consciousness, Redwood Anderson writes of the “shining Dark” and the “Divine Abyss”:

for this, beyond time and eternity, beyond the being of God,
was to God’s being what silence is to the word:
the Silence that was ere the Word was spoken,
the Word that gives shape to the Silence…”

Redwood Anderson explains his views on man’s position in relation to the Ultimate Reality of God—and how, in acting as though he alone matters, man denies his relationship to the whole and thus commits “sin”—as follows:

“The trouble begins when man asserts his peripheral position to be central: this is Original Sin. All asceticism is designed to break the mortal hold of the egocentric and anthropocentric obsession. One should not abandon the world, one should embrace the world; but this is safe and right only when one has abandoned oneself. It is not attachment to an object of desire, whatever that object may be, that is a barrier to the spiritual life, but attachment to oneself in that attachment… If we could remember that all our experiences are not only ours—not our exclusive private property and concern—but also and identically God’s; if we could remember that we are not only ends in ourselves, but also means to the total end: not only self-active organisms (I speak spiritually), but also organs in the Divine Organism—if we could remember this single and simple fact, we should be very near to the mystical life… We should do nothing we were ashamed of, since in our shame God is also ashamed; we should not wittingly do anything to another’s hurt, since in that hurt God is also hurt—and in the hurt thereby done to ourselves God is again hurt. We should be living then as if we lived ‘within’ and not ‘without’.”

“Could we see from all time and simultaneously all the events of the Universe—see them from inside as well as from outside—nothing could appear as irrelevant to the whole pattern: there would be no non-significant matrix, but a single all-comprehending significance, and that in turn means a single all-comprehending truth and beauty and rightness. This is the characteristic of the Divine Experience; and this can in its measure be known and shared by the soul that has abandoned its peripheral isolation… and taken up a central position.

Man must live his life as man, a finite being here on this earth, with his individual and finite values, his individual desires, his loves and his hates, his joys and his sorrows: and, at the same time, man must live that life and realise it as a function of the organic life of the Whole—an autonomous organ of the Divine Experience. This is, I believe, the whole secret of how to experience rightly—a secret nobody ever tells us.”

Quoted from John Redwood Anderson’s book, Transvaluations, and his article, “The Fourth Mysticism”, published in Faith and Freedom (1951), a Unitarian Journal at Manchester College, University of Oxford.