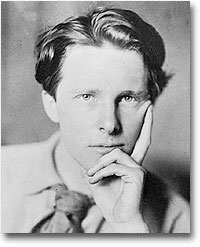 Rupert Chawner Brooke (1887 – 1915) was an English poet born in the market town of Rugby in Warwickshire, England. Educated at The Rugby School and King’s College, University of Cambridge, Brooke was known for the idealistic war sonnets he wrote during World War I, including “The Dead” and “The Soldier”. After university, Brooke spent time traveling in Europe, and, during this period, he wrote a dissertation, entitled “John Webster and the Elizabethan Drama”, for which he earned a Fellowship at King’s College in 1913.

After turning 27, Brooke was commissioned into the Royal Naval Volunteer Reserve as a temporary sub-lieutenant, and he participated in the Royal Naval Division’s Antwerp expedition in October of 1914. Brooke sailed with the British Mediterranean Expeditionary Force, which was en route to the February, 1915 Gallipoli landings; however, he developed pneumococcal sepsis from an infected mosquito bite.

For treatment, Brooke was transferred to the French hospital ship Duguay-Trouin, which was anchored off of Skyros, a Greek Island in the Aegean Sea. There, French surgeons twice drained Brooke’s abscess, but the procedures proved insufficient and Brooke died of septicemia on April 23, 1915. Brooke’s close friend, William Denis Browne, was with Brooke when he died and wrote the following of the poet’s passing:

“I sat with Rupert. At 4 o’clock he became weaker, and at 4.46 he died, with the sun shining all round his cabin, and the cool sea breeze blowing through the door and the shaded windows. No one could have wished for a quieter or a calmer end than in that lovely bay, shielded by the mountains and fragrant with sage and thyme.”

In his 1910 poem, “Dining-room Tea”, Rupert Brooke described his mystical moment as follows:

“Under a vast and starless sky
I saw the immortal moment lie.
One instant I, an instant, knew
As God knows all. And it and you
I, above Time, oh, blind! could see
In witless immortality.”