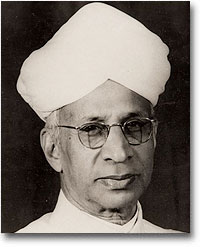 Sarvepalli Radhakrishnan (1888 – 1975) was an Indian philosopher and statesman who served as India’s second president from 1962 to 1967. Radhakrishnan was one of the most distinguished twentieth-century scholars of comparative religion and philosophy, having held the King George V. Chair of Mental and Moral Science at the University of Calcutta from 1921 to 1932 and the Spalding Chair of Eastern Religion and Ethics at the University of Oxford from 1936 to 1952.

Radhakrishnan’s philosophy was grounded in Advaita Vedanta, and he reinterpreted this tradition for modern times. Moreover, he was influential in shaping the world’s understanding of Hinduism, earning a reputation as a bridge-builder between India and the West. In his book, Eastern Religions and Western Thought, Radhakrishnan wrote eloquently on mystical experience as follows (presumably based on his personal experience):

“The transcendent self stoops down, as it were, and touches the eyes of the empirical self overwhelmed by the delusion of the world’s work. When the individual withdraws his soul from all outward events, gathers himself together inwardly and strives with concentration, there breaks upon him an experience, secret, strange and wondrous, which quickens within him, lays hold on him and becomes his very being….

The highest wisdom is to know the Self… The Self is more than the ego; personality is truly a mask. The Self is the silent eternal witness, a light that no power can extinguish, whose attributes are truth and beauty, peace and wisdom, our true being which we do not perceive on account of the cloud of ignorance which covers our eyes… This spiritual consciousness is not a metaphysical fantasy but one that can be realised by each of us. In this transcendental consciousness, where the body is still, the mind attains quiescence, and thought comes to rest, we are in contact with the pure spirit of which the states of waking, dream, and sleep are imperfect articulations….”

“These memorable moments of our life reveal to us the truth that we are, though we soon lapse from them into the familiar life of body, sense and mind; and yet these moments of our divine existence continue to guide us the rest of our lives as ‘pillars of cloud by day, pillars of fire by night’. The soul is led through a succession of states until in the depths of its own being it experiences the touch of divinity and feels the life of God. By breaking through the entanglements of created things, the veils of sense and of intellect, the soul establishes itself in the nudity of spirit. The seer no longer distinguishes himself from that which is seen. He is one with the centre which is the centre of all… God ceases to be an object external to the individual and becomes a consuming experience.”

Quoted from Eastern Religions and Western Thought by Sarvepalli Radhakrishnan.