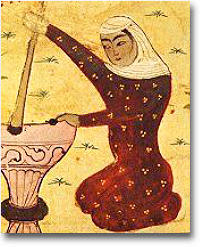 Rabia Basri (717 – 801) is one of the most celebrated Sufi mystics. She is regarded as the person who first set forth the Sufi doctrine of Divine Love, referring to God as “The Beloved.” She is also considered to be the first female Sufi Muslim saint. While Rabia Basri did not leave any written works herself, Hazrat Fariduddin Attar, a later (1145 – 1221) Sufi saint and poet, narrated much of her life using earlier sources.

Rabia Basri described her experience of Divine Love (mystical consciousness) – and the “blotting out” of her individual sense of self – in her poem, “Reality”:

“In love, nothing exists between heart and heart.
Speech is born out of longing,
True description from the real taste.
The one who tastes, knows;
the one who explains, lies.
How can you describe the true form of Something
In whose presence you are blotted out?
And in whose being you still exist?
And who lives as a sign for your journey?”

Regarding her worship of God, Rabia Basri once famously stated: