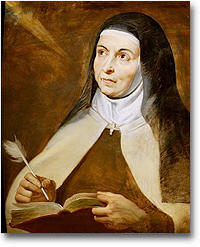 Saint Teresa of Ávila (March 28, 1515 – October 4, 1582) was a prominent Spanish mystic, Roman Catholic saint, Carmelite nun, author of the Counter Reformation, and theologian of contemplative life through mental prayer.  She was a reformer of the Carmelite Order and is considered to be a founder of the Discalced Carmelites along with Saint John of the Cross. Among her most famous works are The Way of Perfection and Interior Castle.

In her book, The Way of Perfection, St. Teresa describes her “Prayer of the Quiet,” and the resulting mystical consciousness:

“The soul rests in peace…all [her] powers are at rest. The soul understands, with an understanding quite different from that given by external senses, that she is now quite close to God and that, if she drew just a little nearer, she would become one thing with him by union.  She does not see him with eyes of the body or the soul.…The soul understands he is there, though not so clearly.  She does not know herself how she understands; she sees only that she is in the Kingdom….

It is like the suspension of all internal and external powers.  The external man does not wish to make the slightest movement but rests, like one who has almost reached the end of his journey, that he may resume his journey with redoubled strength.…The soul is so happy to find herself near the fountain that she is satisfied even without drinking.  She seems to have no more desire.  The faculties are at peace and do not wish to move…However, the faculties are not so lost that they cannot think of Him whom they are near.  Two of them are free.  The will alone is held captive.…The understanding desires to know but one thing, and memory to remember only one.  They both see that only one thing is necessary, and everything else disturbs it….I think therefore that since the soul is so completely happy in this prayer of quiet, the will most be united during most of the time, with Him who alone can satisfy it.”

Quoted from The Way of Perfection (translated by Alice Alexander) by F.C. Happold in Mysticism:  A Study and an Anthology.