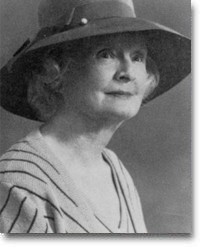 Claire Myers Owens (1896 – 1983) was a novelist, lecturer, and author of non-fiction works about self-realization and Zen Buddhism. In 1949, Owens experienced a spiritual awakening that changed the course of her life. In an effort to make sense of her experience, Owens studied psychology, particularly the work of Carl Jung. Owens described her spiritual awakening in her second published book, Awakening to the Good. Her work was praised by prominent psychologists and philosophers who were pioneers in the human potential movement, such as Abraham Maslow, Carl Jung, and Aldous Huxley. Owens said of herself that she was “the happiest person she ever met.”

Claire Myers Owens wrote the following of the mystical union that she experienced while she was working at her writing desk on a quiet morning:

“Suddenly the entire room was filled with a great golden light, the whole world was filled with nothing but light. There was nothing anywhere except this effulgent light and my own small kernel of the self. The ordinary ‘I’ ceased to exist. Nothing of me remained but a mere nugget of consciousness. It felt as if some vast transcendent force was invading me without my volition, as if all the immanent good lying latent within me began to pour forth in a stream, to form a moving circle with the universal principle. My self began to dissolve into the light that was like a great golden all-pervasive fog. It was a mystical moment of union with the mysterious infinite, with all things, all people.”

Quoted by Louann Stahl in A Most Surprising Song: Exploring The Mystical Experience.