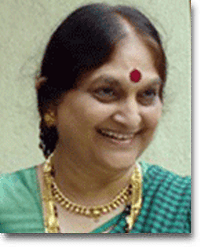 Deepa Kodikal (1941 – 2013) was a university graduate in science, family woman with four children, and mystic.  Kodikal had varied tastes, enjoying playing the sitar, performing Indian dance and music, and flying gliders.  She was also a play writer and director as well as a painter.  Kodikal is the author of A Journey Within the Self, a diary of yogic revelations in which she described the adventure of inner awakening.  She also wrote Teachings of the Inner Light: A Blueprint for Right Living, a work that received wide critical acclaim.

Deepa Kodikal described her mystical consciousness, which occurred during a “deep meditation” one night, as follows:

“I began by seeing the universe as one sees the sky from earth.  Slowly, my individual identity was broken down, and, when my limiting individuality was totally demolished, I assumed the universal form.  I was everywhere at one time, seeing everything, the micro, the macro, from the closest quarters, from the furthest range.  I was everywhere, all-pervading, formless, omnipresent, all-knowing and all-enjoying.

I was omnipresent, all-knowing and all-enjoying.  But I was not the universe.  I was totally free of it, independent of it and uninvolved in it.  I spread everywhere, but formlessly and unencumbered by attachments, an eternal witness not bound by the universe.  I was pure and intelligent consciousness, seeing all and knowing all but not depending on the universe for sustenance.

I felt light, free and unmoving, yet I was at all points, all at the same time.  Witness to everything.

Uninvolved, free of emotions, free of thought, pure, and vast, I remained poised in eternity and in infinity, in quiet enjoyment; still, composed, calm, and in repose.”

Quoted from Deepa Kodikal’s spiritual diary, A Journey Within the Self.