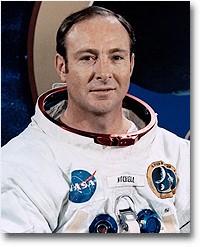 Edgar Mitchell, Sc.D., Ph.D. (1930 – 2016) was an American naval officer and aviator, test pilot, aeronautical engineer, NASA astronaut, and consciousness research pioneer. Educated at Carnegie Mellon, The Naval Postgraduate School, and M.I.T., Mitchell was the Lunar Module Pilot for the Apollo 14 Moon Mission. He was the sixth person to walk on the moon. Among the many awards Mitchell received are the Presidential Medal of Freedom, the Navy Distinguished Service Medal, and the NASA Distinguished Service Medal.

Mitchell described his mystical experience, which occurred on his way back to earth after nine hours of working on the moon’s surface, as follows:

The magnificence of all of this was this trigger in my visioning. In the ancient Sanskrit, it’s called Samadhi. It means that you see things with your senses the way they are – you experience them viscerally and internally as a unity and a oneness accompanied by ecstasy.

According to the Institute of Noetic Sciences, which Mitchell founded, “That moment, for Mitchell, was an epiphany, and it sowed the seeds of his next mission, which he described as follows:

‘To broaden the knowledge of the nature and potentials of mind and consciousness and to apply that knowledge to the enhancement of human well-being and the quality of life on the planet.’

To that end, he founded the Institute of Noetic Sciences [IONS] in 1973. Noetic, from the Greek word noetikos, means “inner/intuitive knowing.”

As a physical scientist, Mitchell had grown accustomed to directing his attention to the objective world “out there.” But the experience that came to him while hurtling through space led him to a startling hypothesis: Perhaps reality is more complex, subtle, and inexorably mysterious than conventional science had led him to believe. Perhaps a deep understanding of consciousness (inner space) could lead to a new and expanded view of reality in which objective and subjective, outer and inner, are understood as equal aspects of the miracle and mystery of being. In his words:

‘I realized that the story of ourselves as told by science – our cosmology, our religion – was incomplete and likely flawed. I recognized that the Newtonian idea of separate, independent, discreet things in the universe wasn’t a fully accurate description. What was needed was a new story of who we are and what we are capable of becoming.’” For nearly 40 years, the Institute of Noetic Sciences has worked toward that end.

Quoted from “In Memoriam: Edgar Mitchell, ScD, PhD”, a video prepared by the Institute of Noetic Sciences.