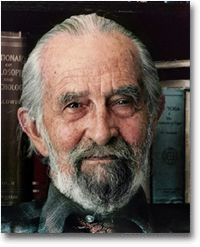 Franklin Merrell-Wolff (1887 – 1985) was an American philosopher and mystic. After being educated in philosophy and mathematics at Stanford and Harvard, he devoted himself to the goal of achieving a level of consciousness beyond that of standard human conception.  Merrell-Wolff explored a number of mystical paths, ultimately dedicating himself to the path of jnana yoga and the writings of Shankara, the most influential expounder of the nondual philosophy of Advaita Vedanta.

Merrell-Wolff had a profound mystical experience in 1936 that provided the basis for his transcendental philosophy.  Wolff’s published books, which detail his experience and philosophy, include Pathways Through to Space, The Philosophy of Consciousness Without an Object, and Transformations in Consciousness: The Metaphysics and Epistemology.

Merrell-Wolff wrote the following about his spiritual awakening (note that we have inserted paragraph breaks below for ease of reading):

“I had been sitting in a porch swing, reading….Ahead of the sequence in the book, I turned to the section devoted to “Liberation,” as I seemed to feel an especial hunger for this.  I covered the material quickly and it all seemed very clear and satisfactory.  Then, as I sat afterward dwelling in thought upon the subject just read, suddenly it dawned upon me that a common mistake made in higher meditation – i.e., meditation for Liberation – is the seeking for a subtle object of Recognition, in other words, something that could be experienced.

Of course, I had long known the falseness of this position theoretically, yet had failed to recognize it.  (Here is a subtle but very important distinction).  At once, I dropped the expectation of having anything happen.  Then, with eyes open and no sense stopped in functioning – hence no trance – I abstracted the subjective moment – the “I AM” or “Atman” element – from the totality of the objective consciousness manifold.  Upon this I focused.  Naturally, I found what, from the relative point of view, is Darkness and Emptiness.  But I Realized It as Absolute Light and Fullness and that I was That.

Of course, I cannot tell what IT was in Its own nature.  The relative forms of consciousness inevitably distort nonrelative Consciousness.  Not only can I not tell this to others, I cannot even contain it within my own relative consciousness, whether of sensation, feeling, or thought.

Every metaphysical thinker will see this impossibility at once.  I was even prepared not to have the personal consciousness share in this Recognition in any way.  But in this I was happily disappointed.  Presently I felt the Ambrosia-quality in the breath with the purifying benediction that it casts over the whole personality, even including the physical body.  I found myself above the universe, not in the sense of leaving the physical body and being taken out of space, but in the sense of being above space, time, and causality.  My karma seemed to drop away from me as an individual responsibility.  I felt intangibly, yet wonderfully, free.  I sustained this universe and was not bound by it.  Desires and ambitions grew perceptibly more and more shadowy.  All worldly honors were without power to exalt me.  Physical life seemed undesirable.

Repeatedly, through the days that followed, I was in a state of deep brooding, thinking thoughts that were so abstract that there were no concepts to represent them.  I seemed to comprehend a veritable library of Knowledge, all less concrete than the most abstract mathematics.  The personality rested in a gentle glow of happiness, but while it was very gentle, yet it was so potent as to dull the keenest sensual delight.  Likewise the sense of world-pain was absorbed.  I looked, as it were, over the world, asking:  “What is there of interest here?  What is there worth doing?”

I found but one interest:  the desire that other souls should also realize this that I had realized, for in it lay the one effective key for the solving of their problems.  The little tragedies of men left me indifferent.  I saw one great Tragedy, the cause of all the rest, the failure of man to realize his own Divinity.  I saw but one solution, the Realization of this Divinity.”

Quoted from Franklin Merrell-Wolff’s Pathways Through to Space.