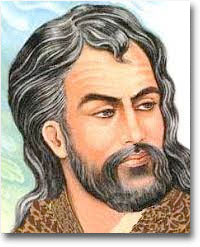 Khwaja Shams-ud-Din Muhammad Hafez-e Shirazi, known as Hafez or Hafiz (1325/26 – 1389/90), was a Persian poet and mystic. Among Hafez’s most treasured poems are his short love songs called ghazals, which focus largely on faith and The Beloved (God).  His collected works are regarded as a pinnacle of Persian literature.  They can be found in most homes in Iran and are also enjoyed throughout the world.  Many of Hafiz’s poems are available online for free here:  Poems From the Divan of Hafiz.

While few details of Hafez’s life are known, it is said that, by listening to his father’s recitations, Hafez learned the Qur’an by heart at a young age (“Hafez” means “memorizer of the holy book”).  Hafez was a natural poet, and, in his early twenties, he gained the patronage of a succession of rulers and wealthy noblemen.  Hafez then worked as a court poet and a college professor at a religious college founded by one of his benefactors.  Hafez married and had at least one son (both his wife and son passed away during Hafez’s life).

Hafez was first and foremost a spiritual seeker and, ultimately, a Sufi master.  Early in his life, Hafez became a disciple of the master Sufi teacher Muhammad Attar.  Attar guided Hafez through a long and trying spiritual apprenticeship that lasted most of Hafez’s adult years.  At the age of 60, after forty years of discipleship, Hafez is said to have begun a forty-day-and-night vigil by sitting in a circle which he had drawn for himself.  On the 40th day, he met with Muhammad Attar and was offered a cup of wine, which was symbolic of the embodiment of perfect love, Hafez himself.  Hafez then attained cosmic consciousness (god-realization).

In the following poem, Hafez describes the process of growing to a state mystical consciousness:

“Little by little,
You will turn into stars.

Even then, my dear,
You will only be
A crawling infant,
Still skinning your knees on God.

Little by little,
You will turn into
The whole sweet, amorous Universe.
In heat
On a wild spring night.

And become so free
In a wonderful, secret
And pure Love
That flows
From a conscious,
One-pointed,
Infinite need for Light.

O little by little,
You will turn into God.”

In the poem below, Hafez wrote of his mystical state of perfect love and perfect knowing:

“I hear the voice
Of every creature and plant,
Every world and sun and galaxy––
Singing the Beloved’s name!”

From Daniel Ladinksy’s renderings of Hafiz, I Heard God Laughing: Poems of Hope and Joy.