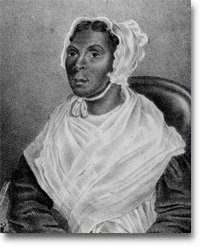 Jarena Lee (1783 – ?) was a nineteenth century African-American woman who eloquently described her mystical experience  in her autobiography, Religious Experience and Journal of Mrs. Jarena Lee.  Lee was the first African American woman to have an autobiography published in the United States.

Moreover, Lee was the first woman authorized to preach by Rev. Richard Allen, the founder of the African Methodist Episcopal Church, which was the first African-American denomination organized and incorporated in the United States.  Eventually, after the untimely death of her husband, Pastor Joseph Lee, Jarena Lee became a traveling minister.  In one year alone, she travelled 2,375 miles, giving 178 sermons.

Jarena Lee had the following salvation/mystical experience, which occurred during a sermon given by Rev. Richard Allen, as “her soul was gloriously converted to God, under preaching, at the very outset” of the reverend’s sermon:

“The text was barely pronounced, which was ‘I perceive thy heart is not right in the sight of God,’ when there appeared to my view, in the centre of the heart, one sin; and this was malice against one particular individual who had strove deeply to injure me, which I resented.  At this discovery, I said Lord I forgive every creature.  That instant, it appeared to me as if a garment, which had entirely enveloped my whole person, even to my fingers’ ends, split at the crown of my head, and was stripped away from me, passing like a shadow from my sight – when the glory of God seemed to cover me in its stead.

That moment, though hundreds were present, I did leap to my feet and declare that God, for Christ’s sake, had pardoned the sins of my soul.  Great was the ecstasy of my mind, for I felt that not only the sin of malice had been pardoned, but all other sins were swept away together.  That day was the first when my heart had believed, and my tongue had made confession into salvation – the first words uttered, a part of that song, which shall fill eternity with its sound, was glory to God.  For a few moments, I had power to exhort sinners, and to tell of the wonders of the goodness of Him who had clothed me with His salvation.”