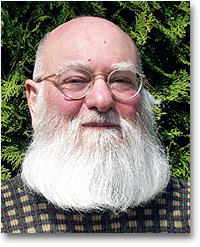 Jordan Paper, Ph.D. (December 3, 1938 – ) is Professor Emeritus of Humanities at York University in Toronto, Canada, where his academic focus is Religious Studies and East Asian Studies.  Paper taught classes on ecstatic religious experience, and he has written on the topic of mystic experience for more than 30 years.  Among his works are Mystic Experience: A Descriptive and Comparative Analysis and Chinese Way in Religion.

“In 1972 [at the age of 34], the most momentous event of my life took place on a perfect summer day at an ideal summer occasion, a weekend folk music/jazz festival on the beautiful park island that forms the outer boundary of Toronto’s harbor…It was early afternoon and, having finished a light lunch, I lay down alone on the grass under the shade of an old tree….

I was lying on my side and directly in my vision across a sunlit, mown field I perceived an attractive woman.  Without moving my head or eyes, I focused on her, enjoying the vision with little or no thought, save a pleasant erotic feeling.  At first she slowly filled my vision, as if I were floating toward her or her toward me.  Then with increasing speed she came closer and closer, followed by trees, rocks, the field, and then the entire universe, whirling in a giant vortex that funneled into me.  As everything literally became one with me, I perceived a bright light inside rather than outside of me.  This light can best be described as white, but it was all colors simultaneously, and it was bright beyond the brightest light imaginable.  I, the universe, began to fly faster and faster toward the light.  At that moment, I comprehended that I had to make an instantaneous decision:  I could enter the light into which I would merge and be gone or stop and end the experience.  Somehow, I recognized what was happening.  I sped into the light and dissolved in an immense flood tide of joy.

Later – it could have been a quarter of an hour or an hour or more – I regained awareness.  At first I was aware of a blissful nothingness; that is, the first awareness was simply of being aware while awash in the afterglow of bliss.  Then there was an awareness of a somethingness, which I began to perceive as composed of things:  sensations of sights and sounds.  Slowly, these components took on specific qualities, took on names and meanings.  The world was again around me; there was an ‘I’ that was again in a remembered world.  But it was not the same ‘I’ as before.  It was an ‘I’ that knew with absolute certitude that the state of being an ‘I’ was less true than the state of being not ‘I,’ that the only reality is a blissful, utterly undifferentiated nothingness in which there is no ‘I.’”

Paper wrote that about one month before his experience he “had moved to Toronto from a small southern Indiana city…to take up a new university post.  I had gone from an area where I was a despised minority – in several ways – to…one of the finest and most metropolitan cities in the world.  I had left behind a place into which I could not fit, a dead marriage, and a deadening scholarly direction for a vibrant artistic world, new social opportunities, and a return to the only scholarly direction that excited me – religious studies.  I was physically fit…[and] had returned to a semivegetarian diet.  I had no emotional entanglements.  I had not yet begun to teach or do research…It was a still point in my life.  Perhaps a pleasant, positive, vacuous life is conducive to an experience of the void.”

Quoted from The Mystic Experience: A Descriptive and Comparative Analysis by Jordan Paper.