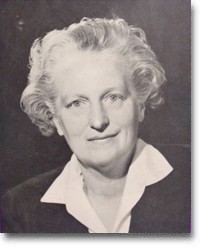 Katherine Trevelyan, who lived during the 20th century, is considered to be one of the greatest Western mystics of modern times.  Born of a prominent British family, Trevelyan grew up in the years before World War I, married, and had two daughters.  Trevelyan shared her personal challenges and spiritual journey in her work Through Mine Own Eyes: The Autobiography Of A Natural Mystic.

In her autobiography, Katherine Trevelyan, who had had spiritual experiences throughout her life, described her mystical illumination as follows:

“When I knew myself as nothing but a prize fool in love, I took my pain and foolishness in both hands and quite simply offered them to God, whom I recognized through this last anguish to be the backcloth of my life and my eternal love.

What followed was beyond me to understand…

It felt as though an infinitely complex machine had in all its parts, between one moment and the next, clicked silently into gear and started to work with inexorable power.

I saw face to face at last.

Light streamed down from the sky such as I have never beheld.  The sun shone with a new light, as though translucent gold were at its heart.  I saw not only the physical sun, but the spiritual sun also, which poured down on me as I walked in the garden at Coombe.

The wonder was beyond anything I have ever read or imagined or heard men speak about.  I was Adam walking alone in the first Paradise.  That is was a garden near the outskirts of London in the twentieth century made no difference, for time was not, or had come round again in a full circle.  Though I was Adam, I had no need for Eve, for both combined within me.  Marriage and maternity fulfilled and surpassed, I had run beyond womanhood and become a human being.

Every flower spoke to me, every spider wove a miracle of intricacy for my eyes, every bird understood that here was heaven come to earth….

When I breathed, I breathed Him; when I asked a question, He both asked and answered it.

My heart was unshuttered to Him, and He came and went at will; my head had no limit or boundary of skull, but the Spirit of God played on me as though my mind were a harp which reached the zenith.

Every prayer was fulfilled, every possible desire for the whole world consummated; for His Kingdom had come and I had beheld it with my very eyes.”

Quoted by Louann Stahl in A Most Surprising Song:  Exploring The Mystical Experience.