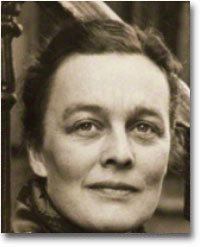 Kathleen Raine, Ph.D. (1908 – 2003) was a British poet and William Blake scholar.  She was interested in spirituality – Platonism and Neoplatonism in particular – and frequently contributed to the journal “Studies in Comparative Religion”.  In 1981, she co-founded the periodical “Temenos” and, in 1990, she founded the Temenos Academy of Integral Studies, “an educational charity in London which aims to offer education in philosophy and the arts in the light of the sacred traditions of East and West.” In 2000, Raine was made a Commander of the British Empire (CBE).

Raine described a mystical experience she had one evening while sitting near a table she used for writing her poetry.  While looking at a hyacinth on the table, and gazing at the “eye-like hearts” of the flowers, her consciousness shifted:

“I found that I was no longer looking at it, but was it; a distinct, indescribable, but in no way vague, still less emotional shift of consciousness into the plant itself.  Or, rather, I and the plant were one and indistinguishable; as if the plant were a part of my consciousness.  I dared scarcely to breath, held in a kind of fine attention in which I could sense the very flow of life in the cells.  I was not perceiving the flower, but was living it.  I was aware of the life of the plant as a slow flow of circulation of a vital current of liquid light of the utmost purity….  There was nothing emotional about this experience, which was, on the contrary, an almost mathematical apprehension of a complex and organized whole, apprehended as a whole.  This whole was living, and as such inspired a sense of immaculate wholeness.  Living form – that is how I can best describe the soul of the plant….  The experience lasted for some time – I have no idea how long – and I returned to dull common consciousness with a sense of diminution.  I had never before experienced the like, nor have I sense in the same degree; and yet at the time it seemed not strange but the most intimately familiar, as if I were experiencing at last things as they are, was where I belonged, where in some sense, I had always been and would always be.  That almost continuous sense of exile and incompleteness of experience which is, I suppose, the average human state, was gone like a film from sight.

Quoted from The Land Unknown by Paul Marshall in The Shape of the Soul.

Photo Credit:  Kathleen Raine from That Wondrous Pattern: Essays on Poetry and Poets.