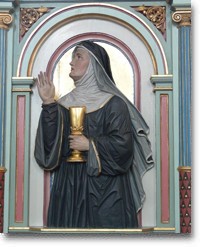 Mechthild of Magdeburg (1207 – 1282 or 1297) was a German mystic, who, at the age of 12, first saw “all things in God, and God in all things.”  In 1235, Mechthild became a member of a local house of the Beguines, an independent group of laywomen who devoted their lives to God.  Mechthild went through a severe illness, recovered, and had 14 years of visions of God, which she described in her book The Flowing Light of the Godhead.  In 1270 Mechthild took formal vows and joined the crown of all German convents, the convent of Helfta.

In her poetry, Mechthild of Magdeburg wrote about the encounter between the self (soul) and the Self (God) as a relationship between lovers.  She created the following poem about her mystical union:

“Effortlessly,
Love flows from God into man,
Like a bird
Who rivers the air
Without moving her wings.
Thus we move in His world,
One in body and soul,
Though outwardly separate in form.
As the Source strikes the note,
Humanity sings –
The Holy Spirit is our harpist,
And all strings
Which are touched in love
Must sound.”

While Mechthild of Magdeburg endeavored to describe her spiritual experiences in her writing, she also conveyed the great difficulty in conveying her divine experiences, noting that:

“Of all that God has shown me
I can speak just the smallest word,
Not more than a honey bee
Takes on his foot
From an overspilling jar.”

Quoted by Jane Hirshfield in Women in Praise of the Sacred: 43 Centuries of Spiritual Poetry by Women.

Image Credit:  Photo of a painting of Mechthild of Magdeburg by Andreas Praefcke.