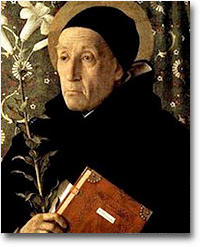 Meister Eckhart (1260 – 1328) was a Catholic German theologian, philosopher, author, and mystic. Eckhart came into prominence during the Avignon Papacy, at a time of increased tensions between the Franciscan Order and Eckhart’s Dominican Order of Preachers. He once stated that, “Theologians may quarrel, but the mystics of the world speak the same language.” In later life, Eckhart was accused of heresy, brought up before the local Franciscan-led Inquisition, and tried as a heretic by Pope John XXII.

Eckhart described one of his mystical experiences as follows:

“When I came out from God, that is, into multiplicity, then all proclaimed ‘There is a God’ [i.e. the personal God, Creator of all things]. Now this cannot make me blessed, for hereby I realize myself as creature. But in the breaking through [i.e. through all limitations], I am more than all creatures, I am neither God nor creature; I am that which I was and shall remain evermore. There I receive a thrust which carries me above all angels. By this sudden touch I am become so rich that God [i.e. God as opposed to the Godhead – the essential being of God] is not sufficient for me, so far as he is only God and in all his divine works. For in this breaking through I perceive what God and I are in common. There I am what I was. There I neither increase nor decrease. For there I am the immovable which moves all things. Here man has won against what he is eternally [i.e. in his essential being] and ever shall be. Here God [i.e. the Godhead] is received into the soul.”

Quoted by Rudolf Otto in Mysticism East and West: A Comparative Analysis of the Nature of Mysticism.