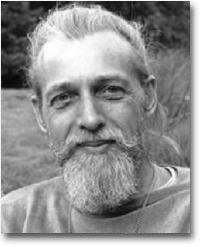 Muz Murray (1941 – ) is a spiritual teacher and the author of Seeking the Master: A Guide to the Ashrams of India and Sharing the Quest, a guide to a spiritual life in the world.

Muz Murray’s first mystical experience occurred in 1964 while he was “gazing vacantly” at the sea after enjoying a meal in Cyprus near the port of Limassol. Murray “was feeling very tranquil and relaxed” and wrote the following of his experience:

“I began to feel a strange pressure in my brain. It was as if some deliciously loving hand had crept numbingly under my skull and was pressing another brain softly into mine. I felt a thrilling liquidity of being and an indescribable sensation as if the whole universe was welling-out of me from some deep center. My “soul” thrilled and swelled and I kept expanding until I found myself among and within the stars and planets. I understood that I was the whole universe! Yet suddenly I became aware of huge entities millions of miles high, maneuvering in space, through which the stars could still be seen….wave upon wave of extraordinary revelation swept through me, too fast for my conscious mind to record other than the joy and wonder of it. In those moments of eternity I lived and understood the truth of the esoteric saying “as above–so below.” I was shown that every cell had its own consciousness which was mine.”

Muz Murray’s experience lasted about three minutes, at most. However, he stated that “my whole cocksure, intellectual assurance of how I imagined the world to be, was destroyed in one go…” and the experience “was enough to change my whole life.” Murray described the fact that, after his experience, he avoided meat, alcohol, and tobacco.  He also eventually devoted his life to the practice and study of mysticism, in contrast to his previous non-spiritual lifestyle.