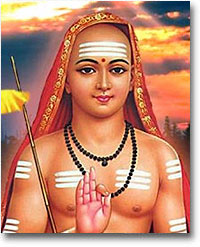 Adi Shankara (also known as Sri Shankaracharya) is widely regarded as being one of the greatest Indian saints and philosophers; he lived sometime during the fifth to eighth centuries. The name Shankara means “giver of prosperity”. Shankara is credited with the development and advancement of Advaita Vedanta, a Hindu spiritual and religious path that proclaims the unity of the Atman (the Self) and Nirguna Brahman, which is Brahman without attributes (the Supreme Reality). Shankara’s works elaborate on ideas found in the Vedas, Brahma Sutras, and Upanishads.

Most biographies state that Shankara was born on the 14th year of King Vikramaditya’s rule; however, it is not clear which particular king this was. Some of the suggested dates of Shankara’s birth range from 509 B.C.E. to 805 C.E. Shankara was born in the village of Kaladi in southern India. His parents were aged at the time of his birth, and his father died shortly after Shankara was born.

In his formative years, Shankara was taught by the sage Govinda Bhagavatpada, who was a disciple of Gaudapada, the author (or compiler) of the Maṇḍukya Karika, also known as the Gaudapada Karika. Shankara studied various works such as the Vedas, Upanishads, and Brahma Sutras which were pivotal in shaping his future philosophy and worldview.

It is reported that Shankara traveled widely across India to areas such as Bengal and Gujarat, although the chronology of his travels is not conclusive. During his travels, Shankara engaged in philosophical debates with advocates of different sects of Hinduism as well as other religious thinkers, such as Buddhists. Some biographies credit Shankara with establishing several monasteries that maintain his philosophy to this day.

Shankara is credited with writing over 300 texts and philosophical letters. The works cover a wide range of issues and fields, including poetry, spirituality, philosophy, and social commentary. Among Shankara’s most well-known works are The Bhagavad Gita with The Commentary of Sri Sankaracharya, The Crest Jewel of Discrimination, and Aparokshanubhuti (or Direct Experience of the Absolute). Shankara is believed to have died at the age of 32, although the location and details of his death vary in the different biographies.

Below are excerpts from Adi Shankara’s commentary on the Bhagavad Gita (from Mysticism East and West) describing the mystical state:

“When the confusing play of ideas (chittam) has come to rest, and he thus, through himself (without the senses) through the purified “inward organ” apprehends the highest, which is wholly Spirit, essentially light, then he wins through to joy.”

In his book, The Crest Jewel of Discrimination, Shankara further wrote:

“Brahman [the Ultimate Reality of Consciousness, Existence, and Bliss] alone is real, the world is the appearance [of Brahman]; and there is ultimately no difference between Brahman and Atman, the individual self.”

In Mysticism East and West, the late Theologian Rudolf Otto explains that Shankara’s view is that “Atman [the Self] is not capable of proof nor does it need any… [it is] ‘self-proven’”. Otto further explains Shankara’s ideas about Atman: “For itself, inconceivable, it is the ground of every possibility of conceiving, of every thought, of every act of knowledge. And even he who denies it, insofar as he thereby thinks, considers, and asserts, presupposes it. But above all, Shankara holds that knowledge based on the scriptures is merely the finger which points to the object and which disappears when it itself is looked upon.”

Quoted from Mysticism East and West by Rudolf Otto and The Crest Jewel of Discrimination by Adi Shankara.