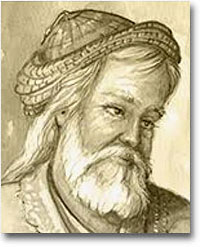 A younger contemporary of the great Sufi theologian, Ibn ‘Arabi, the celebrated Sufi poet, Fakhruddin Iraqi (1213 – 1289), was born in the village of Kamajan, in Persia (present day Iran). According to legend, he was famous in his region for his religious devotion by the time he was eight years old; and, by the age of seventeen, he was giving lectures on the scriptures to his schoolmates. As the story goes, he was drawn to the Sufi path when a group of wandering dervishes passed through the town, and he happened to hear their plaintive songs of divine love. Iraqi immediately left his studies behind, and went off with the Sufi band, wandering throughout Persia and into India.

Later in his life, Iraqi set out for Mecca, and from there to Damascus, and onward north to Anatolia, to the city of Konya, where Sadruddin Qunawi, chief disciple of Ibn Arabi, now lived. Qunawi’s lectures on Ibn Arabi’s Bezels Of Wisdom and Meccan Revelations were attended by Iraqi, who became thoroughly fascinated and inspired by the study of these works. Each day, after the lectures of Qunawi, Iraqi would, in a state of inspired joy, set down a few verses of his own, illustrating Ibn Arabi’s teachings, and at last collected them in a book, which he called Lama’at, which may be translated as “Flashes,” or “Glimpses” of insight.

Here are a few selected verses and passages from his celebrated Lama’at, which describe his mystical consciousness:

“Beloved, I sought You here and there, asked for news of You from all I met. Then I saw You through myself,
And found we were identical.
Now I blush to think I ever searched for signs of You.
By day I praised You, but never knew it;
By night I slept with You without realizing it,
Fancying myself to be myself;
But no, I was You and never knew it.
“O You, who are so unbearably beautiful,
Whose beloved are You?” I asked.
“My own,” He replied;
“For I am one and one alone—
Love, lover, beloved, mirror, beauty, eye!”
He speaks; He listens.
“You” and “I” are but a pretense.
When shall You and I divorce ourselves
So that “You” and “I” are gone,
And only God remains?
If You are everything,
Then, who are all these people?
And if I am nothing,
What’s all this noise about?

You are the Totality;
Everything is You. Agreed!
Then, all that is “other-than-You”—
What is it?
Oh, indeed I know, nothing exists but You! But tell me, whence all this confusion?
He Himself speaks of Truth;
He Himself listens.
He Himself shows Himself; He Himself sees.
The world but seems to be,
Yet it is only a blending of light and shade.
Discern the meaning of this dream;
Discriminate between time and Eternity.

All is nothing, nothing. All is He. All is He.
Listen, riffraff: Do you want to be ALL? Then go, go and become nothing.
You are nothing when you wed the One;
But, when you truly become nothing,
You are everything.

Regard yourself as a cloud drifting before your Sun;
Detach yourself from the senses,
And behold your intimacy with the Sun.
If you lose yourself on this path, Then, you will know for sure: He is you, and you are He.”