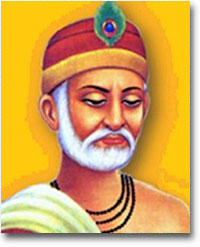 Kabir Das (1440 – 1518) was a 15th-century Indian mystic, poet, and saint who is revered by Hindus, Muslims, and Sikhs. Kabir was born in the city of Varanasi in Uttar Pradesh, India, and he was raised in a Muslim family. Later in his life, Kabir was heavily influenced by the Hindu bhakti leader, Ramananda. He was a weaver by profession.

Kabir is known for being critical of both organized religion and religions. Kabir questioned what he regarded as meaningless and unethical practices of different religions, and those of Hinduism and Islam in particular. Kabir taught that to know the Truth, one must drop the sense of “I”, the ego. Today, Kabir is widely known for his poems, specifically 100 Poems of Kabir. Most of Kabir’s work is concerned with devotion to God, mysticism, and discipline.

When the wave rises, it is the water; when it falls, it is the same water again. Tell me, Sir, where is the distinction?

Because it has been named as wave shall it no longer be considered as water?

Within the Supreme Brahma, the worlds are being told as beads:
Look upon that rosary with eyes of wisdom.”

“It [the Supreme Truth] cannot be told by the words of the mouth. It cannot be written on paper. It is like a dumb person who tastes a sweet thing—how shall it be explained?”

Quoted from Kabir’s One Hundred Poems of Kabir.