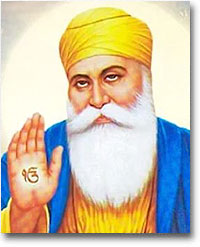 Nanak (1469 –1539), also referred to as Baba Nanak, was born in the small village of Talwandi in the Punjab (now a territory of Pakistan). As a child, Nanak attended school and tended cows for his father, a farmer. However, Nanak did not like rural life, and he proved to be of little use to his father. Nanak thus went to live in Sultanpur with a brother-in-law who held a post there as a petty government officer. Nanak also obtained a governmental post, working as a storekeeper in the Commissariat. Shortly thereafter, at the age of 18, he married, and, by the time he was in his late thirties, he had fathered two sons.

It was during his time at Sultanpur, while working at the Commissariat, that Nanak began to awaken to the spiritual life. He took to joining with a Muslim friend, Mardana, in singing devotional songs and attending religious lectures. It was also around this time that Nanak nearly drowned in a canal where he regularly bathed, and he had a near-death experience (NDE). This NDE generated in him a profound spiritual awareness of the eternal Self.

Thereafter, Nanak proclaimed to his friends and family that he had been taken up to God and had known Him directly. Transformed by his experience, Nanak was inspired to teach others of the all-pervasive God. He thus quit his job, and, renouncing worldly life, set out as a religious mendicant. Nanak traveled extensively across Asia—eastward as far as the city of Benares, as far as Kashmir to the north, and westward, to Afghanistan and Persia, and to Mecca in Arabia—teaching his message of one God who dwells in everyone and constitutes the eternal Truth.

After his long and broad travels, Nanak returned to his family, taking them to the village of Kartarpur, on the Ravi River, where he had been given some fertile farmland. There, in his later years, he settled down as a wheat farmer. A commune of devotees gathered there, and Nanak generously shared with all who came both his grain and the wisdom he had acquired.

During his many years of traveling, Nanak wrote down numerous musings and inspirational songs of God. Below are examples of Nanak’s mystical writings, which describe the spiritual union with God that he experienced:

“When the light of the soul blends with the universal Light,
And the human mind commingles
With the Mind of all things,
Then, our petty being,
With its violence, doubt and sorrow, disappears.
Through the grace of the Guru,
Such spiritual union takes place.
They are blessed in whose hearts the Lord resides.”

“It is not through thought that He is to be comprehended,
Though we strive to grasp Him a hundred thousand times;
Nor by outer silence and long deep meditation
Can the inner silence be reached;
Nor is man’s hunger for God appeasable
By piling up world-loads of wealth.
All the innumerable devices of worldly wisdom
Leave a man disappointed; not one avails.
How then shall we know the Truth?
How shall we rend the veils of untruth asunder?
Abide by His will, and make your own His will,
O Nanak; write this in your heart.”