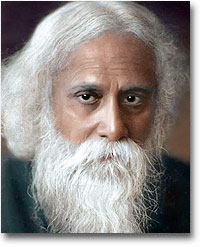 Rabindranath Tagore FRAS (born Rabindranath Thakur; 1861 – 1941) was a Bengali Brahmin polymath—he was a poet, writer, playwright, composer, philosopher, social reformer, and painter. Tagore won the Nobel Prize in Literature in 1913; he was the first non-European to win the award.

Tagore first wrote poetry at the age of eight, and, at 16, he wrote his first short stories and dramas. Tagore was a humanist, universalist, internationalist, and ardent anti-nationalist who advocated for India’s independence from Britain. He was also the founder of Visva-Bharati University, a public university located in Shantiniketan, West Bengal, India.

Rabindranath Tagore described his mystical experience in a letter to his friend, C. F. Andrews. Tagore explained that he was on Free School Street (now named Mirza Ghalib Street) in Kolkata, and he was standing on a verandah watching the sun rise above the trees at the time of his mystical experience. Tagore wrote:

“[A]s I was watching it, suddenly, in a moment, a veil seemed to be lifted from my eyes. I found the world wrapt in an inexpressible glory with its waves of joy and beauty bursting and breaking on all sides. The thick shroud of sorrow that lay on my heart in many folds was pierced through and through by the light of the world, which was everywhere radiant.

That very day the poem known as The Fountain Awakened from its Dream flowed on like a fountain itself. When it was finished, still the curtain did not fall on that strange vision of beauty and joy. There was nothing and no one whom I did not love at that moment… I stood on the verandah and watched the coolies as they tramped down the road. Their movements, their forms, their countenances seemed to be strangely wonderful to me, as if they were all moving like waves in the great ocean of the world. When one young man placed his hand upon the shoulder of another and passed laughingly by, it was a remarkable event to me… I seemed to witness, in the wholeness of my vision, the movements of the body of all humanity, and to feel the beat of the music and the rhythm of a mystic dance.”

Quoted from Letters to a Friend, by Rabindranath Tagore.