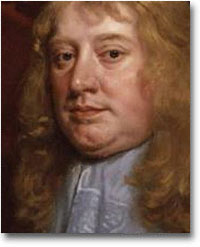 Thomas Traherne (1636 or 1637 – 1674) was an English poet, Anglican cleric, theologian, and religious writer. Traherne was educated at Brasenose College, University of Oxford. He was ordained in 1660 and then served in a number of religious roles, with his final position being the minister of Teddington Church.

Traherne is best known today for “Centuries of Meditations”, a collection of short paragraphs first published in 1908. Much of Traherne’s writings explore the glory of creation and his relationship with God.

Thomas Traherne wrote the following of his mystical experience:

“WILL you see the infancy of this sublime and celestial greatness? Those pure and virgin apprehensions I had from the womb, and that divine light wherewith I was born are the best unto this day, wherein I can see the Universe. By the Gift of God they attended me into the world, and by His special favour I remember them till now. Verily they seem the greatest gifts His wisdom could bestow, for without them all other gifts had been dead and vain. They are unattainable by book, and therefore I will teach them by experience. Pray for them earnestly: for they will make you angelical, and wholly celestial. Certainly Adam in Paradise had not more sweet and curious apprehensions of the world, than I when I was a child.

All appeared new, and strange at first, inexpressibly rare and delightful and beautiful. I was a little stranger, which at my entrance into the world was saluted and surrounded with innumerable joys. My knowledge was Divine. I knew by intuition those things which since my Apostasy, I collected again by the highest reason. My very ignorance was advantageous. I seemed as one brought into the Estate of Innocence. All things were spotless and pure and glorious: yea, and infinitely mine, and joyful and precious, I knew not that there were any sins, or complaints or laws. I dreamed not of poverties, contentions or vices. All tears and quarrels were hidden from mine eyes. Everything was at rest, free and immortal. I knew nothing of sickness or death or rents or exaction, either for tribute or bread. In the absence of these I was entertained like an Angel with the works of God in their splendour and glory, I saw all in the peace of Eden; Heaven and Earth did sing my Creator’s praises, and could not make more melody to Adam, than to me: All Time was Eternity, and a perpetual Sabbath. Is it not strange, that an infant should be heir of the whole World, and see those mysteries which the books of the learned never unfold?

The corn was orient and immortal wheat, which never should be reaped, nor was ever sown. I thought it had stood from everlasting to everlasting. The dust and stones of the street were as precious as gold: the gates were at first the end of the world. The green trees when I saw them first through one of the gates transported and ravished me, their sweetness and unusual beauty made my heart to leap, and almost mad with ecstasy, they were such strange and wonderful things: The Men! O what venerable and reverend creatures did the aged seem! Immortal Cherubims! And young men glittering and sparkling Angels, and maids strange seraphic pieces of life and beauty! Boys and girls tumbling in the street, and playing, were moving jewels. I knew not that they were born or should die; But all things abided eternally as they were in their proper places. Eternity was manifest in the Light of the Day, and something infinite behind everything appeared which talked with my expectation and moved my desire. The city seemed to stand in Eden, or to be built in Heaven. The streets were mine, the temple was mine, the people were mine, their clothes and gold and silver were mine, as much as their sparkling eyes, fair skins and ruddy faces. The skies were mine, and so were the sun and moon and stars, and all the World was mine; and I the only spectator and enjoyer of it. I knew no churlish proprieties, nor bounds, nor divisions: but all proprieties and divisions were mine: all treasures and the possessors of them. So that with much ado I was corrupted, and made to learn the dirty devices of this world. Which now I unlearn, and become, as it were, a little child again that I may enter into the Kingdom of God.”

Thomas Traherne further described his mystical consciousness in his poem, “My Spirit”.

“My naked simple Life was I;

That Act so strongly shined

Upon the earth, the sea, the sky,

It was the substance of my mind;

The sense itself was I.

I felt no dross nor matter in my soul,

No brims nor borders, such as in a bowl

My essence was capacity,

That felt all things;

The thought that springs

Therefrom is itself.  It hath no other wings

To spread abroad, nor eyes to see,

No hands distinct to feel,

Nor knees to kneel;

In its own center is a sphere,

Not shut up here, but everywhere.”

Quoted from The Third Century by Thomas Traherne, as available at www.ccel.org/ccel/traherne/centuries.iii.html (first selection above) and Vedanta, July-August issue (# 306), 2002 (“My Spirit”).