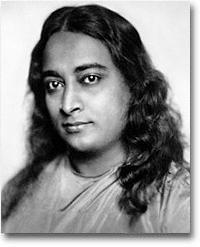 Paramahansa Yogananda (January 5, 1893 – March 7, 1952), was an Indian yogi and guru who introduced millions of westerners to the teachings of meditation and Kriya Yoga.  He is the founder of The Self Realization Fellowship and the author of many books – his best known being Autobiography of a Yogi.

“An oceanic joy broke upon calm endless shores of my soul.  The Spirit of God, I realized, is exhaustless Bliss; His body is countless tissues of light.  A swelling glory within me began to envelop towns, continents, the earth, solar and stellar systems, tenuous nebulae, and floating universes.  The entire cosmos, gently luminous, like a city seen afar at night, glimmered within the infinitude of my being.  The sharply etched global outlines faded somewhat at the farthest edges; there I could see a mellow radiance, ever-undiminished. It was indescribably subtle; the planetary pictures were formed of a grosser light.

The divine dispersion of rays poured from an Eternal Source, blazing into galaxies, transfigured with ineffable auras.  Again and again I saw the creative beams condense into constellations, then resolve into sheets of transparent flame.  By rhythmic reversion, sextillion worlds passed into diaphanous luster; fire became firmament.

I cognized the center of the empyrean as a point of intuitive perception in my heart. Irradiating splendor issued from my nucleus to every part of the universal structure. Blissful amrita, the nectar of immortality, pulsed through me with a quicksilverlike fluidity. The creative voice of God I heard resounding as Aum, the vibration of the Cosmic Motor.”

In his later years, Yogananda wrote the following poem, “Samadhi,” endeavoring to convey the glory of its cosmic state (as quoted from Autobiography of a Yogi):

“Vanished the veils of light and shade,
Lifted every vapor of sorrow,
Sailed away all dawns of fleeting joy,
Gone the dim sensory mirage.
Love, hate, health, disease, life, death,
Perished these false shadows on the screen of duality.
Waves of laughter, scyllas of sarcasm, melancholic whirlpools,
Melting in the vast sea of bliss.
The storm of maya stilled
By magic wand of intuition deep.
The universe, forgotten dream, subconsciously lurks,
Ready to invade my newly-wakened memory divine.
I live without the cosmic shadow,
But it is not, bereft of me;
As the sea exists without the waves,
But they breathe not without the sea.
Dreams, wakings, states of deep turia sleep,
Present, past, future, no more for me,
But ever-present, all-flowing I, I, everywhere.
Planets, stars, stardust, earth,
Volcanic bursts of doomsday cataclysms,
Creation’s molding furnace,
Glaciers of silent x-rays, burning electron floods,
Thoughts of all men, past, present, to come,
Every blade of grass, myself, mankind,
Each particle of universal dust,
Anger, greed, good, bad, salvation, lust,
I swallowed, transmuted all
Into a vast ocean of blood of my own one Being!
Smoldering joy, oft-puffed by meditation
Blinding my tearful eyes,
Burst into immortal flames of bliss,
Consumed my tears, my frame, my all.
Thou art I, I am Thou,
Knowing, Knower, Known, as One!
Tranquilled, unbroken thrill, eternally living, ever-new peace!
Enjoyable beyond imagination of expectancy, samadhi bliss!
Not an unconscious state
Or mental chloroform without wilful return,
Samadhi but extends my conscious realm
Beyond limits of the mortal frame
To farthest boundary of eternity
Where I, the Cosmic Sea,
Watch the little ego floating in Me.
The sparrow, each grain of sand, fall not without My sight.
All space floats like an iceberg in My mental sea.
Colossal Container, I, of all things made.
By deeper, longer, thirsty, guru-given meditation
Comes this celestial samadhi.
Mobile murmurs of atoms are heard,
The dark earth, mountains, vales, lo! molten liquid!
Flowing seas change into vapors of nebulae!
Aum blows upon vapors, opening wondrously their veils,
Oceans stand revealed, shining electrons,
Till, at last sound of the cosmic drum,
Vanish the grosser lights into eternal rays
Of all-pervading bliss.
From joy I came, for joy I live, in sacred joy I melt.
Ocean of mind, I drink all creation’s waves.
Four veils of solid, liquid, vapor, light,
Lift aright.
Myself, in everything, enters the Great Myself.
Gone forever, fitful, flickering shadows of mortal memory.
Spotless is my mental sky, below, ahead, and high above.
Eternity and I, one united ray.
A tiny bubble of laughter, I
Am become the Sea of Mirth Itself.”

Quoted from Paramhansa Yogananda’s Autobiography of a Yogi.