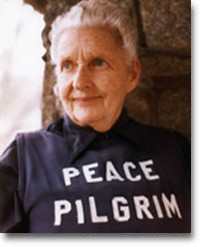 Mildred Lisette Norman (July 18, 1908 – July 7, 1981), known as Peace Pilgrim, was an American non-denominational spiritual teacher, mystic, and peace activist.  On January first, 1953, Peace Pilgrim vowed to walk for peace.  She stated, “I shall remain a wander until mankind has learned the way of peace, walking until I am given shelter and fasting until I am given food.”  Peace Pilgrim walked across the United States for 28 years, carrying only a pen, a comb, a toothbrush, and a map.  It is estimated that she walked across the United States more than 20 times.

“All of a sudden, I felt very uplifted, more uplifted than I had ever been.  I remember I knew timelessness and spacelessness and lightness.  I did not seem to be walking on the earth.  There were no people or even animals around, but every flower, every bush, every tree seemed to wear a halo.  There was a light emanation around everything and flecks of gold fell like slanted rain through the air.  This experience is sometimes called the illumination period.

The most important part of it was not the phenomena:  the important part of it was the realization of the oneness of all creation.  Not only all human beings – I knew before that all human beings are one.  But now I knew also the oneness with the rest of creation.  The creatures that walk the earth and the growing things of the earth.  The air, the water, the earth itself.  And, most wonderful of all, a oneness with that which permeates all and binds all together and gives life to all.  A oneness with that which many would call God.

After her mystical experience, Peace Pilgrim never felt separate from the Oneness.  She stated, “I could return again and again to this wonderful [mystical consciousness], and then I could stay there for longer and longer periods of time and just slip out occasionally.  The inspiration for the pilgrimage came at this time….I felt a strong inner motivation toward the pilgrimage – toward this special way of witnessing for peace.  I saw, in my minds’ eye, myself walking along and wearing the garb of my mission….I saw a map of the United States with the large cities marked – and it was as though someone had taken a colored crayon and marked a zigzag line across, coast to coast, and border to border, from Los Angeles to New York City.  I knew what to do.  And that was a vision of my first year’s pilgrimage route in 1953!”