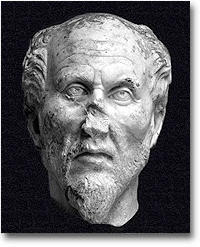 Plotinus (204/5 – 270) was a major philosopher of the ancient world.  His metaphysical writings have inspired centuries of Pagan, Christian, Jewish, Islamic and Gnostic metaphysicians and mystics.  You can read selected works from Plotinus online for free here:  The Essential Plotinus.

Plotinus wrote of his mystical experiences in his Enneads:

“Many times it has happened:  Lifted out of the body into myself; becoming external to all other things and self-encentered; beholding a marvelous beauty; then, more than ever, assured of community with the loftiest order; enacting the noblest life, acquiring identity with the divine; stationing within It by having attained that activity; poised above whatsoever within the Intellectual is less than the Supreme:  yet, there comes the moment of descent from intellection to reasoning, and after that sojourn in the divine, I ask myself how it happens that I can now be descending, and how did the soul ever enter into my body, the soul which, even within the body, is the high thing it has shown itself to be.”

“If the initiate has seen, she knows that in the experience there were not two; seer was one with the Seen (it was not really a vision but a unity apprehended).  The person formed by this mingling with the Supreme must – if she only remember – carry its image impressed upon her.  She is become the Unity, with no distinction in her either in relation to herself or anything else, for there was no movement in her, and she had no emotion, no desire for anything else when she had achieved the ascent, no reason or thought, her own self was not there for her, if we dare say this.  She was as if carried away or possessed by God, in a quiet solitude, in the stillness of her being, altogether at rest and having become a kind of rest.”

Quoted from The Six Enneads by Plotinus.