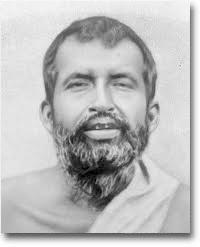 Ramakrishna (February 18, 1836 – August 16, 1886) was a famous mystic of 19th-century India. He emphasized God-realization as the supreme goal of all living beings. Ramakrishna’s religious school of thought, Vedanta (based on the Vedas, the sacred scriptures of India) led to the formation of the Ramakrishna Mission by his chief disciple, Swami Vivekananda. In addition to Vedanta, Ramakrishna also practiced other religions — notably Islam and Christianity — and said that all religions lead to the same God.

The most well known book about Ramakrishna is Sri Ramakrishna Kathamrita by Mahendranath Gupta (“M”).  The book was translated to English by Swami Nikhilananda and entitled The Gospel of Sri Ramakrishna.  The text, first published in 1942, records conversations that Ramakrishna had with his disciples, devotees, and visitors.

Ramakrishna was at one time the priest of a temple of Kali, the Divine Mother. His unorthodox actions caused the temple authorities frequent embarrassment. On one occasion, he fed food, reserved as an offering to Kali, to a certain cat. Ramakrishna defended this decision by stating:

On another occasion, Ramakrishna declared:

“When I think of the Supreme Being as inactive – neither creating, nor preserving, nor destroying – I call him Brahman…the Impersonal God. When I think of him as active – creating, preserving, destroying – I call him Sakti, or Maya, or Prakriti, the Personal God. But the distinction between them does not mean a difference. The Personal God and the Impersonal God are the same thing….It is impossible to conceive one without the other.”

Quoted by W.T. Stace in Mysticism and Philosophy.