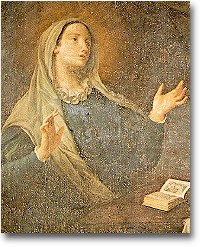 Saint Catherine of Genoa (1447 – 1510) was an Italian Catholic mystic who served as an administrator of a large city hospital. She was born into an aristocratic family and was married under pressure to a man with whom she was not a good match. After struggling with depression for a decade, Saint Catherine had a life-changing mystical experience. She then committed herself to helping the sick and the poor in Genoa’s slums, serving the less fortunate for the remainder of her life.

Saint Catherine wrote about the process of spiritual development, stating:

“When the good God calls us in this world, he finds us full of vices and sins, and his first work is to give us the instinct to practice virtue; then he incites us to desire perfection, and afterwards, by infused grace, he conducts us to the true annihilation, and finally to the true transformation. This is the extraordinary road along which God conducts the soul.  But when the soul is thus annihilated and transformed, it no longer works, or speaks, or wills, or feels, or understands, nor has it in itself any knowledge, either of that which is internal or external, which could possibly affect it; and, in all these things God is its director and guide without the help of any creature.”

“In this state [i.e., mystical consciousness], the soul is in such peace and tranquility that it seems to her that both soul and body are immersed in a sea of the profoundest peace, from which she would not issue for anything that could happen in this life. She remains immovable, imperturbable, and neither her humanity nor her spirit feels anything except the sweetest peace, of which she is so full, that if her flesh, her bones, her nerves were pressed, nothing would issue from them but peace. And all day long, she sings softly to herself for joy…

I am more confused than satisfied with the words I have used to express myself, but I have found nothing better for what I have felt. All that I have said is as nothing compared to what I feel within, the witnessed correspondence of love between God and the Soul; for when God sees the Soul pure as it was in its origins, He tugs at it with a glance, draws it and binds it to himself with a fiery love that by itself could annihilate the immortal soul.  In so acting, God so transforms the soul in Him that it knows nothing other than God; and He continues to draw it up into His fiery love until He restores it to that pure state from which it first issued. As it is being drawn upwards, the soul feels itself melting in the fire of that love of its sweet God, for He will not cease until He has brought the soul to its perfection.”