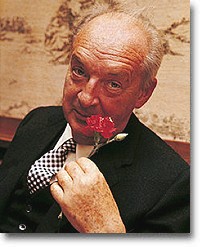 Vladimir Nabokov (1899 – 1977), also known by his pen name Vladimir Sirin, was a prolific Russian-American author and poet.  A graduate of Trinity College, University of Cambridge, Nabokov taught Russian literature at Wellesley and Cornell. He is considered to be of the twentieth century’s most brilliant writers. Lolita (1955), Nabokov’s most famous novel in English, was ranked fourth on the list of the Modern Library 100 Best Novels. Nabokov also spent considerable time on the composition of chess problems.

“I confess I do not believe in time.  I like to fold my magic carpet, after use, in such a way as to superimpose one part of the pattern upon another.  Let visitors trip.  And the highest enjoyment of timelessness – in a landscape selected at random – is when I stand among rare butterflies and their food plants.  This is ecstasy, and behind the ecstasy is something else, which is hard to explain.  It is like a momentary vacuum into which rushes all that I love.  A sense of oneness with sun and stone.  A thrill of gratitude to whom it may concern – to the contrapuntal genius of human fate or to tender ghosts humoring a lucky mortal.”