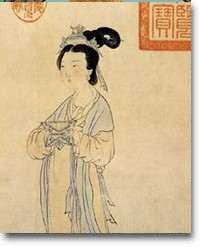 Zhou Xuanjing (12th century) was a Chinese Taoist whose curiosity about the Way [i.e., The Absolute or The Divine] was initially awakened when she dreamt that she was immersed in a scarlet mist (considered an auspicious sign) just before the birth of her son, Wang Chuyi, who would ultimately become a Taoist teacher of the highest rank.  Zhou Xuanjing became a disciple of the same teacher who would guide Wang Chuyi, and the teacher eventually gave Zhou Xuanjing the tile “Free Human of Mystic Peace.”

Zhou Xuanjing wrote of her mystical consciousness in the following poem:

“Meditating at midnight,
Meditating at noon,
A mind like autumn
Comes to the Way’s [i.e., The Absolute’s] deep heart.
Under motionless waves,
Fish and dragons freely leap.
In the sky without limits,
Only the moonlight stays.”

Quoted by Jane Hirshfield in Women in Praise of the Sacred: 43 Centuries of Spiritual Poetry by Women.

Image Credit: Painting of a Chinese woman from the Yuan Dynasty from http://arts.cultural-china.com.