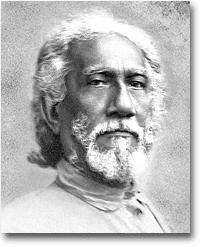 Sri Yukteswar Giri (1855 – 1936), born Priya Nath Karar, was a Kriya yogi, Vedic astrologer, scholar of Vedantic texts, educator, author of The Holy Science, and astronomer.  He was a disciple of Lahiri Mahasaya and a member of the Giri branch of the Swami order.  Sri Yukteswar was also the guru of Paramahansa Yogananda, his most famous disciple and the author of Autobiography of a Yogi.

In his book, The Holy Science—which aimed to explain the underlying unity between the scriptures of Christianity and of Sanatan Dharma (i.e., the eternal truth and teachings of Hinduism)—Sri Yukteswar Giri described the unitive mystical state as follows:

“In [the state of Kaivalya, oneness], all the necessities having been attained and the ultimate aim effected, the heart becomes perfectly purified and, instead of merely reflecting the spiritual light, actively manifests the same.  Man, being thus consecrated or anointed by the Holy Spirit, becomes Christ, the anointed Savior.  Entering the kingdom of Spiritual Light, he becomes the Son of God.

In this state man comprehends his Self as a fragment of the Universal Holy Spirit, and, abandoning the vain idea of his separate existence, unifies himself with the Eternal Spirit; that is, becomes one and the same with God the Father.  This unification of Self with God is Kaivalya, which is the Ultimate Object of all created beings.”

In Autobiography of a Yogi, Sri Yukteswar described God to his disciple, Paramahansa Yogananda, as follows:

“It is the Spirit of God that actively sustains every form and force in the universe; yet He is transcendental and aloof in the blissful uncreated void beyond the worlds of vibratory phenomena…

Ever-new Joy is God. He is inexhaustible; as you continue your meditations during the years, He will beguile you with an infinite ingenuity.  Devotees like yourself who have found the way to God never dream of exchanging Him for any other happiness; He is seductive beyond thought of competition.

How quickly we weary of earthly pleasures!  Desire for material things is endless; man is never satisfied completely, and pursues one goal after another.  The ‘something else’ he seeks is the Lord, who alone can grant lasting joy.

Outward longings drive us from the Eden within; they offer false pleasures which only impersonate soul-happiness.  The lost paradise is quickly regained through divine meditation.  As God is unanticipatory Ever-Newness, we never tire of Him.  Can we be surfeited with bliss, delightfully varied throughout eternity?”

Source:  The Holy Science by Sri Yukteswar Giri and Autobiography of a Yogi by Paramahansa Yogananda (from www.crystalclarity.com/autobiography-of-a-yogi-yogananda/).