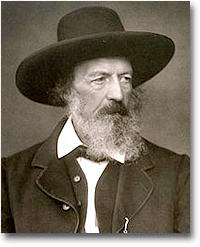 Alfred Tennyson (August 6, 1809 – October 6, 1892) was Poet Laureate of Great Britain and Ireland during much of Queen Victoria’s reign.  He remains one of the most popular British poets.  Among his best known works are “In Memoriam,” “The Charge of the Light Brigade,” “Ode on the Death of the Duke of Wellington,” and “Ode Sung at the Opening of the International Exhibition.”

Tennyson described his mystical experiences in his poetry:

“More than once when I
Sat all alone, revolving in myself
The word that is the symbol of myself,
The mortal limit of the Self was loosed,
And passed into the nameless, as a cloud
Melts into heaven. I touch’d my limbs, the limbs
Were strange, not mine – and yet no shade of doubt,
But utter clearness, and thro’ loss of Self
The gain of such large life as matched with ours
Were sun to spark – unshadowable in words,
Themselves but shadows of a shadow-world …”

“A kind of walking trance I have frequently had, quite up from boyhood, when I have been all alone.  This has often come upon me through repeating my own name to myself silently till, all at once, as it were, out of the intensity of the consciousness of individuality, the individuality itself seemed to dissolve and fade away into boundless being; and this not a confused state, but the clearest of the clearest, the surest of the surest, the weirdest of the weirdest, utterly beyond words, where death was an almost laughable impossibility, the loss of personality (if so it were) seeming no extinction, but the only true life…”

“Yes, it is true there are moments when the flesh is nothing to me, when I feel and know the flesh to be the vision, God and the spiritual – the only real and true.  Depend upon it, the spiritual is the real; it belongs to one more than the hand and the foot.  You may tell me that my hand and my foot are only imaginary symbols of my existence.  I could believe you, but you never, never can convince me that the I is not an eternal reality, and that the spiritual is not the true and real part of me.”

Tennyson said of his mystical experience (in a letter to the prominent 19th century physicist Professor John Tyndall), “By God Almighty!  there is no delusion in the matter!  It is no nebulous ecstasy, but a state of transcendent wonder, associated with absolute clearness of mind.”