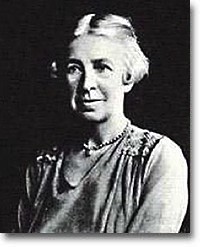 Evelyn Underhill (1875-1941) was an English poet, novelist, and writer on mysticism.  Educated at King’s College for Women, London, Underhill was Upton Lecturer on the Philosophy of Religion at Manchester College, University of Oxford.  She was the first woman to address the clergy of the Church of England. Underhill wrote a number of books on mysticism, including Mysticism, The Mystic Way, Practical Mysticism, and The Essentials of Mysticism.

The following excerpt from The Letters of Evelyn Underhill describes her mystical experience:

“The first thing I found out was exalted and indescribable beauty in the most squalid places.  I still remember walking down the Notting Hill main road and observing the landscape [which was extremely sordid] with joy and astonishment.  Even the movement of traffic had something universal and sublime about it.  Of course, that does not last – but the after-flavour of it does, and now and then one catches it again.  When one does catch it, it is so real that to look upon it as wrong would be an unthinkable absurdity.  At the same time, one sees the world at those moments so completely as “energized by the invisible” that there is no temptation to rest in mere enjoyment of the visible.”

In another passage, from Mysticism, Underhill connects mystical consciousness to perfect love:

“A harmony is thus set up between the mystic and Life in all its forms.  Undistracted by appearance, he sees, feels, and knows it in one piercing act of loving comprehension….The heart outstrips the clumsy senses, and sees – perhaps for an instant, perhaps for long periods of bliss – an undistorted and more veritable world.  All things are perceived in the light of charity, and hence under the aspect of beauty: for beauty is simply Reality seen with the eyes of love….For such a reverent and joyous sight the meanest accidents of life are radiant.  The London streets are paths of loveliness; the very omnibuses look like coloured archangels, their laps filled full of little trustful souls.”