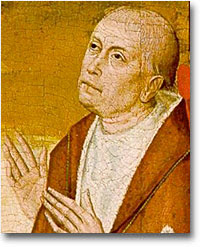 Nicholas Cusa (1401 – 1464) was born Nicholas Krebs at Cues (Cusa) on the Moselle River in the Rhineland to a wealthy barge captain. Like Thomas á Kempis, twenty years before him, Nicholas went as a young boy to the Brethren of The Common Life at Deventer to receive his early education. At the age of 16, he entered the University of Heidelberg, and then transferred to the University of Padua, where he studied Canon law, the sciences, mathematics, and Greek. He received his degree at the age of 22, and thereafter decided to enter the priesthood. Nicholas studied theology at Cologne, as did Meister Eckhart, and, in 1426, became secretary to the Cardinal legate, Giordano Orsini, becoming ordained as a priest in 1430.

It seems that, around this time, Nicholas collected and read a great number of classic philosophical and mystical works, including those of Plato, Eriugena, Dionysius the Areopagite, and especially Meister Eckhart. Sometime around his 28th year, it appears that he experienced “the vision of God” of which he was later to write about so lucidly. But, in the years that followed, Nicholas became caught up in the politics of the Church and the ongoing disputes between the Church and the state, thus beginning the career of reform and reconciliation, which lasted, throughout his life. Nevertheless, Nicholas frequently experienced the uncommon drawing-power experienced within that which is known as “Grace,” and he described mystical experience as follows:

“The vision of God is not seen in this world… until He will make Himself visible beyond all obscurity….None can attain unto Thee, … none can possess himself of Thee, except Thou givest Thyself to him.

…In beholding me, Thou givest Thyself to be seen of me, Thou who art the hidden God. None can see Thee save insofar as Thou grantest a sight of Thyself, nor is that sight anything else than Thy seeing him that seeth Thee.”

Of his own mystical experience, Nicholas is typically silent in most of his written works; but, in “The Vision Of God”, written for the monks of Tegernsee, he does reveal something of his own vision. Here, he speaks of how the “Face of God” may be seen beyond the veil of all appearances and all faces:

“Thou hast at times appeared unto me, Lord, not as one to be seen of any creature, but as the hidden, infinite, God…. Thou dost ravish me above myself that I may foresee the glorious place whereunto Thou callest me. Thou grantest me to behold the treasury of riches, of life, of joy, of beauty…. Thou keepest nothing secret.

…I behold Thee, O Lord my God, in a kind of mental trance, …Thus, while I am borne to loftiest heights, I behold Thee as Infinity… And when I behold Thee as absolute Infinity, to whom is befitting neither the name of creating Creator nor of creatable Creator—then indeed I begin to behold Thee unveiled, and to enter into the garden of delights! …[In that vision] nothing is seen other than Thyself, [for Thou] art Thyself the object of Thyself (for Thou seest, and art That which is seen, and art the sight as well)….

Hence, in Thee, who art Love, the lover is not one thing and the loved another, and the bond between them a third, but they are one and the same—Thou, Thyself, my God.

Since, then, in Thee the loved is one with the lover, and being loved [is one] with loving, this bond of coincidence is an essential bond. For there is nothing in Thee that is not Thy very Essence… I see, Lord, through Thine infinite mercy, that Thou art Infinity encompassing all things. Nothing exists outside Thee, and all things in Thee are not other than Thee.”

Quoted from The History of Mysticism by Swami Abhayananda.