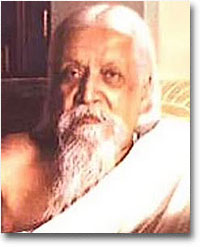 Sri Aurobindo (1852 – 1950) was a philosopher, poet, and influential spirituality/yoga teacher. Aurobindo was born third in a family of five in the Indian city of Calcutta in West Bengal. His father, Krishna Ghose, was a surgeon, which meant Aurobindo had a comfortable upbringing. Krishna believed that education was important and ensured that all his children became fluent in English. In 1879, the entire family moved to Britain to facilitate the children’s advanced studies. Over time, Aurobindo became conversant in at least 12 languages, including Greek, French, German, and Sanskrit. After finishing his studies, in 1893 Aurobindo returned to India to work in the state service. His father died just before Aurobindo returned to India, after being misinformed that Aurobindo had died at sea.

Aurobindo soon became a revolutionist and was actively involved in nationalist politics. He joined the Anushilan Samiti movement based in Bengal, a nationalist movement seeking Indian independence from Britain at all costs. Aurobindo was arrested and charged with treason in 1908 after the Anushilan Samiti group had been linked to various bombings of the ruling regime, and he was imprisoned in the Alipore Jail. However, Aurobindo was ultimately found innocent due to a lack of evidence. During his time in jail, Aurobindo had a spiritual Awakening, and what he valued changed from politics and revolution to spirituality.

After withdrawing from politics, Aurobindo moved from Calcutta to Pondicherry, where he developed a philosophy and practice called Integral Yoga. His many books include The Life Divine, The Integral Yoga, The Human Cycle, and The Future Poetry. Aurobindo was nominated twice for the Nobel prize—for Literature in 1943 and Peace in 1950. His life and philosophy have been influential to modern spiritual practices and beliefs. Various renowned authors and philosophers such as Ken Wilber, Jean Gebser, and William Irwin Thompson have cited Sri Aurobindo as their main influence. Sri Aurobindo died in 1950 at the age of 98.

“At the gates of the Transcendent stands that mere and perfect spirit described in the Upanishads, luminous, pure, sustaining the world…, without flaw of duality, without scar of division, unique, identical, free from all appearance of relation and multiplicity,– the pure Self of the Advaitins, the inactive Brahman, the transcendent Silence. And the mind when it passes those gates suddenly… receives a sense of the unreality of the world and the sole reality of the Silence which is one of the most powerful and convincing experiences of which the human mind is capable.”

According to the late Princeton University Philosophy Professor, W.T. Stace, we see from Aurobindo’s Integral Yoga philosophy that “Aurobindo is mostly concerned to do justice to what he regards as two poles of human thought, Western scientific materialism and Eastern idealistic mysticism. Each tends to run to unacceptable extremes. He blames Indian mysticism for its extreme otherworldliness. To this he thinks Western materialism, which is the other extreme, is a valuable counterweight. Moreover, he thinks that the mystical mind which is not restrained and kept straight by a clear, austere, and trained intellect—such as scientific education produces—is apt to lose itself in a world of fantasies and perverting superstitions. The function of Western materialistic science in the evolution of the human spirit has therefore been to clarify and discipline the mind so that it can advance on a more solid basis to the heights of spirituality. He even writes that ‘we should observe with respect and wonder the work which atheism has done in the service of the Divine.'”

Quoted from The Life Divine by Sri Aurobindo and The Teachings of the Mystics by W.T. Stace.