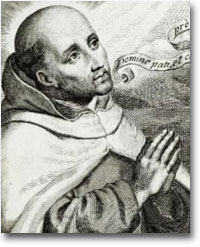 Juan de Yepes y Alvarez was born on June 24, 1542, at Fontiveros, a small village about twenty-four miles northwest of Avila in the district of Old Castille, Spain. At the age of twenty-one, Juan begged admittance to the Carmelite Order of Santa Ana, and was accepted as a monk in that contemplative Order. A year later, he made his profession, taking the name of Fray Juan de San Matias. But, since he required yet more education to be ordained as a priest, he was sent to the university of Salamanca for a year, where he studied scholastic philosophy and theology; and finally, in 1567, at the age of twenty-five, he was ordained. It was just at this time that Juan met the nun, Mother Teresa de Jesus, who was then a woman past fifty years of age, and who was later to be recognized as a saint and known to the world as Teresa of Avila.

At Avila, some years before this meeting, Mother Teresa had founded the reformed Order of Carmelite nuns, called the Discalced (barefoot) Carmelites, which was more strictly ascetic and more given to a life of contemplation than the parent Order. She had been searching for a few monks to serve as confessors and guides to her nuns in a second convent to be established at Medina; and, learning of Fray Juan through another priest, Antonio de Heredia, she met with him, and convinced him to join the new, more primitive, Order. This Juan did gladly, for he had been dissatisfied with the laxity of his own Rule and was eagerly searching for a means to enter into a life more given to solitude and the way of prayer. There, he took a new name: Juan de la Cruz, “John of the Cross.”

The success and expansion of the Reformed Order was not, however, without its troubles. The spreading fame of the ascetic Order called forth much resentment and opposition from the conservative elements of the Church. Especially fierce was the opposition of the Friars of the Calced, or unreformed, Carmelite Order, who felt that they were being devalued, or even replaced, by the new Order. In retaliation. Fray Juan and some of his brother monks were kidnapped by the Calced Brothers and were imprisoned in a Calced priory. There, Juan was flogged mercilessly, and then taken blindfolded to the city of Toledo―that infamous bastion of the Inquisition. There, a trial was held, presided over by Tostado, in which Juan was found guilty of rebellion and contumacy and condemned to an unspecified term of imprisonment. He was thrown into a closet, six feet by ten feet, which had served as a privy to an adjoining guest-chamber. This was in December of 1557. His home for the next nine months was this small stone privy-closet, lit only by a small hole at the top.

He was given a board covered by a rug to lie on and was fed on scraps of dry bread and an occasional sardine. He was given no bath or change of clothes during this entire time, so he became covered by lice and sores. During the winter months, he endured freezing cold, and in the summer months the stifling heat. On Fridays, which were Feast days, he was taken to the refectory where the friars sat at their table and made to kneel in the center of the room, taking a bit of dry bread and water like a dog. At this time, the Prior would admonish and taunt Juan with reproaches, after which all the monks would in turn strike him vigorously across his bared shoulders with a cane. Juan bore all this without a word.

It was during this nine-month period in his tiny cell that Juan wrote down, on scraps of paper given to him by a sympathetic jailer, the verses which were to comprise his most famous and exquisite poetry on the “dark night” of the soul, and its union with its Lord. It was there, in this most wretched physical state, that his mind, freed from all but God, his only solace, experienced that illumination which he calls the “divine marriage” of the soul and God. Much later, when he was asked by a nun if any consolations had been given him during his imprisonment, he replied, “My daughter, one single grace of those that God gave me there could not be paid for by many years of prison.”

The desire for God, says Juan, “is the preparation for union with Him…. If a person is seeking God, his Beloved is seeking him much more. And if a soul directs to God its loving desires, God sends forth His fragrance by which He draws it and makes it run after Him.

What God communicates to the soul in this intimate union is totally beyond words. One can say nothing about it just as one can say nothing about God Himself that resembles Him. For in the transformation of the soul in God, it is God who communicates Himself with admirable glory. In this transformation, the two become one, as we would say of the window united with the ray of sunlight, or of the coal with the fire, or of the starlight with the light of the Sun….

The soul thereby becomes divine, becomes God, through participation, insofar as is possible in this life The union wrought between the two natures, and the communication of the divine to the human in this state is such that even though neither changes their being, both appear to be God.

Having been made one with God, the soul is somehow God through participation. Although it is not God as perfectly as it will be in the next life, it is like the shadow of God. Being the shadow of God through this substantial transformation, it performs in this measure in God and through God what He, through Himself, does in it. For the will of the two is one will, and thus God’s operation and the soul’s is one.

In the inner wine cellar
I drank of my Beloved; and, when I went abroad Through all this valley,
I no longer knew anything,
And lost the herd which I was following.

There He gave me His breast.
There He taught me a sweet and living knowledge; And I gave myself to Him,
Keeping nothing back.
There I promised to be His bride.

Now I occupy my soul
And all my energy in His service; I no longer tend the herd,
Nor have I any other work
Now that my every act is love.

…What more do you want, O soul! And what else do you search for outside, when within yourself you possess your riches, delights, satisfactions, fullness, and kingdom ―your Beloved whom you desire and seek? Be joyful and gladdened in your interior recollection with Him, for you have Him so close to you.  Desire Him there, adore Him there.  Do not go in pursuit of Him outside yourself. You will only become distracted and wearied thereby, and you shall not find Him, nor enjoy Him more securely, nor sooner, nor more intimately than by seeking Him within you.”

Quoted from The History of Mysticism by Swami Abhayananda.